He's coachless and winless since Roland Garros, but a rejuvenated Nick Kyrgios is primed to overcome his troubled build-up and embark on another magical Wimbledon run. 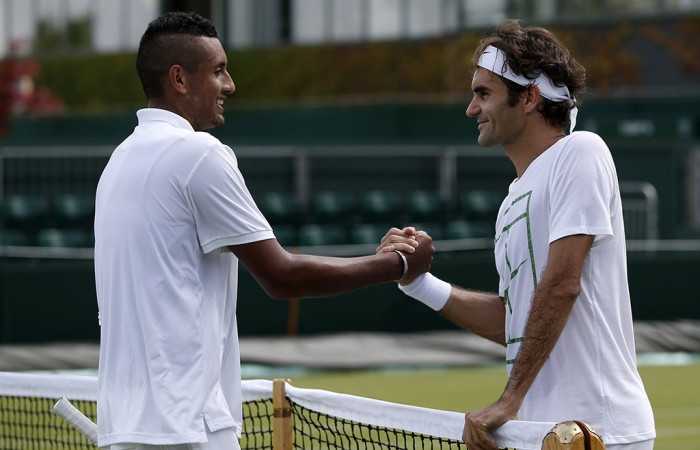 He’s coachless and without a win since the French Open, but a rejuvenated Nick Kyrgios is primed to overcome his troubled build-up and embark on another magical Wimbledon run.

Declaring himself back to full health and over the elbow injury that cruelled his Roland Garros chances, Kyrgios believes he’s “twice the player” who announced his arrival last year in such spectacular fashion.

The 20-year-old’s optimism is reflected in the rankings.

Kyrgios has soared some 150 spots to secure a seeding after following up his earth-moving fourth-round centre-court win over Rafael Nadal with another major quarterfinal at the Australian Open.

“I’ve always got a good chance no matter who I play,” he said ahead of a Monday opener against Argentine Diego Schwartzman.

“I feel confident and obviously, making a run last year, I feel like I can do that again every time I step on court.”

He’s done that and says “it felt more like home” as soon as he walked through the gates at the All England Club for the first time since last year’s heroics.

“Obviously this is where it all happened for me last year. This was my sort of breakthrough and there were a lot of emotions and memories,” Kyrgios said.

“But I feel more comfortable this time around; not so much expectation. I feel as though I can just go out there and play the game.”

Far from a setback, the Canberra excitement machine said splitting with long-time coach Todd Larkham during the week had loosened the shackles after he’d been wrestling with the decision for some time.

“So I just needed to make that change and I feel as though those adjustments have paid off a little bit,” Kyrgios said.

Not short of practice partners, Kyrgios hit with Roger Federer on Thursday to fine-tune his explosive power game.

The Swiss maestro famously won a swag of Grand Slam crowns while flying solo, but Australia’s 26th seed said he didn’t seek any advice from the seven-time champion on that front.

“But I feel like I played fine against him yesterday and I feel as though that was the best decision for me at the time,” he said.

While respectfully wary, he is expected to account for claycourter Schwartzman to set up a meeting with either another unseeded Argentine in Juan Monaco or veteran German Florian Mayer.

“He obviously can play some really good tennis on the grass and he’s been top 10 for a long time,” Kyrgios said.

“He hasn’t played a lot of tennis. He had a couple of operations recently so I’ll probably feel confident going out against him.

“But with that serve, the game can change. If he serves well, he’s tough to beat.”

Unlike others, Kyrgios admitted he’d taken a peep at the draw and was already looking beyond the opening rounds.

“Of course, especially knowing I made the quarterfinals last year and I feel as if I’m twice the player than I was,” he said.

“I feel as though I can make another run, definitely.”