Stay tuned for Thanasi Kokkinakis to showcase why greats of the game believe the teenage prodigy will soon be the main man of Australian tennis. 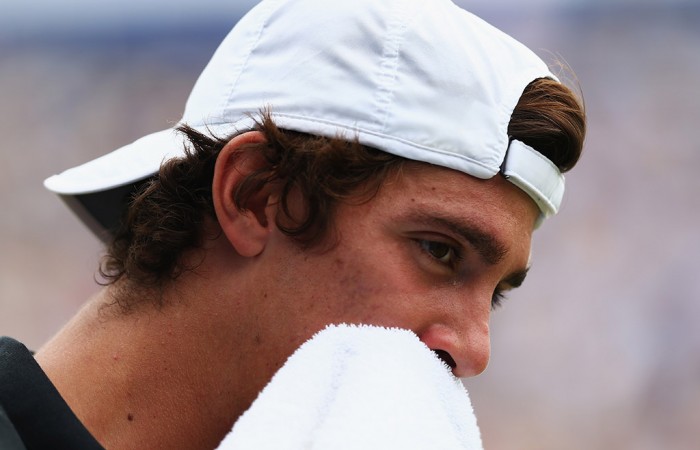 He’s playing a support role for now, but stay tuned for Thanasi Kokkinakis to showcase why greats of the game believe the teenage prodigy will soon be the main man of Australian tennis.

Seeded big names and former quarterfinalists Nick Kyrgios and Bernard Tomic may be hogging the spotlight, but Rafter has no doubts Kokkinakis will inevitably emerge from their shadows.

Rafter is thrilled by Australia’s 16-strong contingent at the All England Club this year, but sees something special in Kokkinakis, who has rocketed from 628th in the world at the start of last year to 69th in the rankings.

“I love his attitude,” said the two-time Wimbledon finalist and Tennis Australia’s director of player performance.

“He may not have that raw, gifted talent as much as a Tomic and Kyrgios, but he’s not far off. But what he has is that he wants to be there, he wants to be a player. He loves it, he trains hard and his on-court attitude is fantastic.

“His Davis Cup (performance against the Czech Republic) with Wally (Masur) was brilliant.

Women in the crowd at The Boodles, a garden party-like pre-Wimbledon exhibition event, had already cottoned on to such a fact as they swooned over the teenage ace last week.

Newcombe, Rafter and Hewitt, though, know that beneath the style is also plenty of substance.

Kokkinakis will take on Mayer, the 24th seed, just a week after almost being hospitalised with a violent intestinal infection and a fortnight after flying home from London and back to say his final goodbyes to his dying grandmother.

On court and off, Kokkinakis is all class.

After downing world No.11 Ernests Gulbis at the Australian Open, he conjured further five-set heroics in Davis Cup and then against Bernard Tomic at last month’s French Open to set up a third-round date with Novak Djokovic.

“It’s a Grand Slam but if I play my game and be aggressive and have it on my terms, I think I can have success,” said Kokkinakis, who won the Wimbledon junior doubles with Kyrgios in 2013.

“I have good memory of winning the doubles with Nick but you never really know what the Grand Slam is like until you play the main draw.

“I can’t wait to play. Hopefully I play some good tennis on the day.”

Even if doesn’t, it’s unlikely Kokkinakis will lose his cool; the youngster’s temperament is another quality that has impressed the greats.

“I try and keep it together. I do lose my head sometimes,” Kokkinakis said.

“I try and swear into a towel or something like that, if that’s the case. If you get too angry, you use a lot of energy and it takes it out of you mentally, especially over a best-of-five-set match.