After flying home to be with his family, Thanasi Kokkinakis has recovered from his intense round-the-world trip to win his first round match at Queen's. 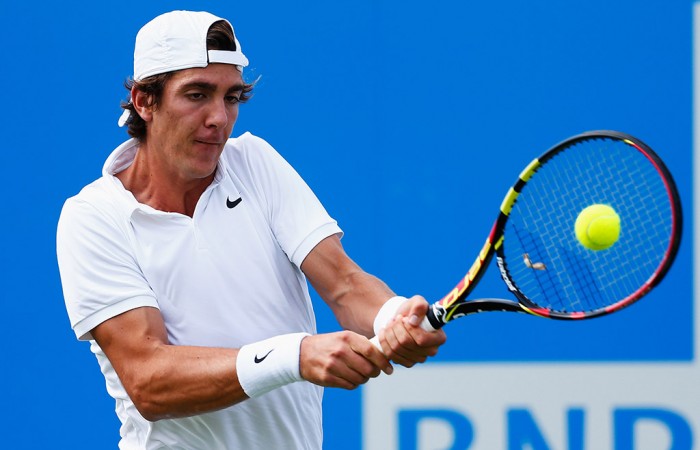 Update 7.45am: Thanasi Kokkinakis has turned a 33,000km whirlwind round-the-world visit to his ailing grandmother into an emotional defeat of French veteran Jeremy Chardy at Queen’s Club.

Kokkinakis flew back home to Adelaide to be with his family and grandmother over the weekend before returning to London on Monday ahead of Tuesday’s clash.

“I felt like I was travelling a lot more than I was home, which is weird,” he said.

“I spent 30 hours home and back off. I’m a little bit tired, but as soon as I got here I had kind of a hit (on Monday) night to get the cobwebs out a little bit.

“I slept long enough. I was ready to go tomorrow or, well, today.”

He didn’t play like a man who had spent nearly 48 hours on planes in the previous three days, getting stronger as the match went on while he worked into a rhythm.

While his forehand briefly deserted him late in the first set, which he lost in a tiebreak, Kokkinakis regained his composure, while the more experienced Chardy became vocal with the chair umpire and chastised himself as the double faults mounted.

Kokkinakis, too, seemed miffed at some of his early play, angry at his miscued forehands while looking at his racquet in the hope it might accept some of the blame.

But it was easy to put into perspective for the world No.69.

“(My grandmother is) struggling but she’s all right,” he said. “She’s old. It happens.”

Despite carrying heavy legs into the clash, he said it was a decision he would make ten times over.

“Yeah, I’m definitely happy with the decision I made,” he said.

“It was good to be home. It was definitely good to go home and seeing family. (But it was) kind of good that I could kind of play the match and try and put it to the side.”

Next up is No.7 seed Gilles Simon.