Anderson too strong for Hewitt 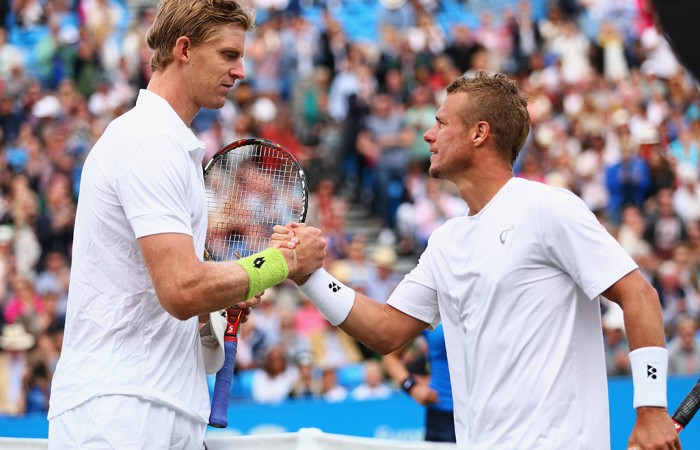 Update 8.30am: Lleyton Hewitt insists his farewell tour is not an emotional one, despite a first-round loss to South Africa’s world No.17 Kevin Anderson in his Queen’s Club finale.

The 34-year-old, who will retire after next year’s Australian Open, let slip a match point which would have delivered a memorable straight-sets victory and set up a second-round clash against the winner of Nick Kyrgios’ showdown with French Open champion Stan Wawrinka, before going down 6-7(5) 7-5 6-2 on Monday.

“Yeah, I don’t think it will be that emotional,” Hewitt said about his year-long farewell tour.

“You know, (I’ll) just try and enjoy it as much as possible. I’m fortunate that not many people in sport get to go out on their terms, and I have always said that I wanted to.

“If the body held up and the opportunities were there, I would love to go out on my terms. And so far it looks like I’ll be able to do that.”

The 34-year-old buried a forehand into the net when presented with match point and never recovered.

Little went right for the two-time major champion after that, with Anderson breaking back to level the second set before holding serve and then breaking Hewitt a second time in a devastating 10-minute period for the Australian.

“I felt like he sort of stepped it up from that point,” Hewitt added.

“Even from 4-3 when he went down a break, that next game, I was down love-30, and fought hard to get out of that one.

The big-serving Anderson raced to a 3-0 lead in the deciding set as Hewitt wilted despite enjoying the crowd support at an event he’s won a record-equalling four times, most recently in 2006.

Hewitt was presented with an engraved bottle of champagne in recognition of his popularity at the Queen’s Club, where he has played an incredible 16 tournaments.

“It was special to come back,” he said. “Knowing it was going to be the last one, as well.

“I have played so many big matches in front of big crowds here over the years, with big names.

“For most of the first two sets I played pretty well out there.”

But despite the third-set fade out, Hewitt did show there was substance to his final season on tour with crisp passing shots and pinpoint lobs giving the crowd a gentle reminder of his talents.

The world No.117, who will contest his final Wimbledon in a fortnight, was fired up from the start on Monday, barking a loud “C’mon” to his supporters box after winning the very first point of the match.

He didn’t let up from there, letting out a huge roar upon prevailing in the first set tiebreak, while the crowd cheered in return as he broke Anderson to love to take a 4-3 lead in the second set.

“Obviously I laid it all on the line today,” Hewitt said.

Kyrgios and Wawrinka will open on centre court on Tuesday, while rising Australian star Thanasi Kokkinakis will also be in action, taking on Frenchman Jeremy Chardy.