Kokkinakis wants to make it his way

Thanasi Kokkinakis has revealed Nick Kyrgios's rollicking 2014 Wimbledon win over Rafael Nadal was the spur for his own meteoric rise to grand slam prominence. 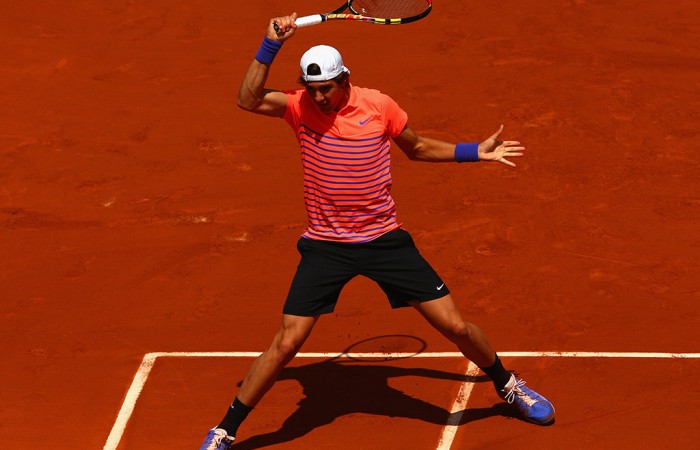 Thanasi Kokkinakis has revealed Nick Kyrgios’s rollicking 2014 Wimbledon win over Rafael Nadal was the spur for his own meteoric rise to grand slam prominence.

Heartened by his third-round run at the French Open and a glowing endorsement from his conquerer Novak Djokovic, Kokkinakis can’t wait to hit London’s lawns to prepare for his own long-awaited assault at the All England Club.

When Kyrgios, then ranked 144th in the world, stunned top seed Nadal to reach the Wimbledon quarterfinals last year, Kokkinakis had just lost to Farrukh Dustov in the first round of a second-tier Challenger event in Winnetka, a small town just north of Chicago.

“It was definitely tough last year watching Nick break through. I’m not going to lie,” Kokkinakis said after bowing out at Roland Garros with a 6-4 6-4 6-4 loss to Djokovic, the top-ranked title favourite.

“I had a look at it and I worked hard to put myself in these positions to play greatest players on big courts.”

Almost 12 months on and Kokkinakis has soared from 302nd to a provisional 68th in the rankings – after starting 2014 at No.628 – securing automatic direct entry to a Grand Slam for the first time at Wimbledon.

The 19-year-old admits Kyrgios and Bernard Tomic both reaching the last eight at Wimbledon as teenagers “definitely” serves as motivation.

“But at the same time I want to do it my own way and not try and rival what they are doing,” he said.

“I want to kind of do better than them. I don’t think I need to change too much what I’m doing. I think I’m on a good path.”

Making his Wimbledon debut, Kokkinakis is relishing the chance to learn the art of grasscourt play from Lleyton Hewitt, an All England Club life member who hoisted the trophy in 2002.

Australia’s Davis Cup captain-in-waiting has taken Kokkinakis under his wing and will partner the 19-year-old in doubles as he makes his Wimbledon swan song.

“I’m going to look to get to London and train with him. Might take one or two days off and then get straight into it on the grass.

“I have a lot to learn on grass but yeah, it’s going to be good training with him.”

“Because I didn’t really play grass last year,” he said.

“I played a lot when I was real young, but the last few years I haven’t played much on it.

“It’s definitely different to out here (on clay), but I think if I can train right my game should suit it.”