Ticket on sale dates for the Davis Cup by BNP Paribas World Group Quarterfinal tie between Australia and Kazakhstan have been announced. 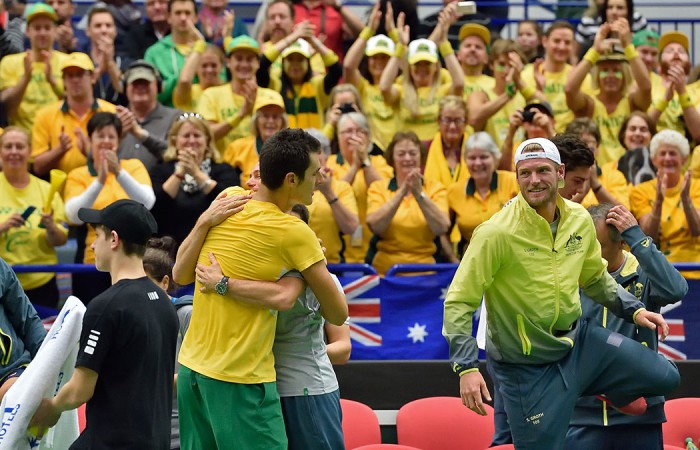 Tickets for the Davis Cup by BNP Paribas World Group Quarterfinal tie between Australia and Kazakhstan will go on sale on Friday 8 May at 12:00 pm ACST (12:30 pm AEST).

In a first for the Top End, fans can enjoy Davis Cup action from 17-19 July at Marrara Sports Complex in Darwin, NT, when the teams take to a purpose-built grass court to battle it out for a berth in the semifinals.

Two-time Grand Slam champion and Australian Davis Cup hero Lleyton Hewitt, along with Bernard Tomic, Nick Kyrgios, Thanasi Kokkinakis, Sam Groth, Marinko Matosevic and James Duckworth, will be vying for selection, with the final team to be announced 10 days before the tie.

“The boys are very much looking forward to this home tie in Darwin,” Australian Davis Cup captain Wally Masur said.

“I’m closely following the progress of the grass court and believe it’s starting to take shape. All the boys are excited at the prospect of representing their country again and we’re all keen to get up there and compete. To be able to play at home on grass in dry, hot conditions suits our players extremely well.

“The team will be fresh from playing at Wimbledon and looking to do all they can to cement Australia’s position on the world stage and secure a place in the semifinals.

“I hope all the local fans come out in their green and gold to support us in July,” Masur added.

The Northern Territory Chief Minister Adam Giles said excitement has been building in the Top End over the tie which will be watched all over the world.

“This has been a huge coup for the Northern Territory and has a massive reach – Darwin will sparkle for the millions of viewers and I’m sure locals will embrace this first class sporting event,” Mr Giles said.

Series packages for the three-day tie will be available to purchase at Ticketek via ticketek.com.au or by calling 132 849.

Play will be split across the weekend with the first two singles rubbers played on Friday, the doubles played on Saturday and the reverse singles on Sunday.

This tie will be the first meeting between Australia and Kazakhstan in Davis Cup history and the first time Darwin has hosted a Davis Cup tie.

Davis Cup by BNP Paribas is the World Cup of Tennis. It is the largest annual international team competition in sport, with 126 nations entered in 2015. The competition is 115 years old having been founded in 1900.