On Anzac Day, we pause to commemorate a fallen soldier who, prior to World War I, was one of the world’s most captivating tennis stars. 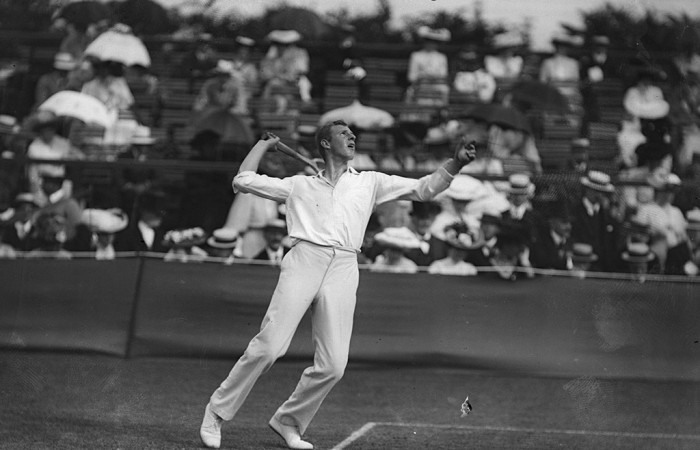 In mid 1914, New Zealander Anthony Wilding was in the midst of a flourishing tennis career. Yet, within just nine months of stepping away due to the outbreak of the First World War, he had joined the Allied forces and quickly ascended in rank before being killed in the trenches.

The sporting world was devastated. According to The Australian Open Book, “at the time of his death (Wilding was) described as perhaps the most widely known amateur athlete in the world.”

He had joined the Royal Marines as a lieutenant before moving into the Intelligence Corps and later the Royal Naval Armoured Car Division, where he served in northern France and Belgium and was ultimately promoted to the role of captain.

He died on 9 May 1915 during the Battle of Aubers Ridge at Neuve-Chapelle, the victim of a shell explosion above the trench in which he sheltered. He was just 31 years old.

His impressive rise through the military ranks before his tragic passing was simply a continuation of a career defined by success.

He was one of the sport’s first glamorous superstars; he had been engaged to American Broadway actor and screen star Maxine Elliot. He often travelled between tournaments throughout Europe via motorcycle. His official website, curated by his family at www.anthonywilding.com, says: “the dashing New Zealander … had female spectators swooning because of his ‘manly brand of tennis’. He was handsome, chivalrous and was always on the lookout for adventure. Wilding would have been a gift for the promoters, agents and advertising men who are so much a part of modern sport. As it was, he was tennis’s first matinee idol.”

A talented sportsman, Wilding had also played first class cricket for Canterbury, and in the field of law – which he studied at Cambridge University – he qualified for the New Zealand bar.

But it was on the tennis court where his achievements surpassed all others.

He finished his career with 11 major titles, including two Australian Championships in singles and four consecutive singles titles at Wimbledon from 1910 to 1913. In the last of those, Wilding beat highly-fancied American Maurice McLoughlin in what many observers describe as the finest performance of his career.

He also won five Monte Carlo titles, a bronze medal for Australasia in singles at the 1912 Stockholm Olympic Games, and a rare triple crown in 1913 where he scooped ILTF World Championship titles on clay in Paris, grass in London and indoor wood in Stockholm.

Wilding was also part of four winning Davis Cup teams for Australasia, back in the time when Australian and New Zealand players combined forces. The fourth of those winning campaigns – in 1914, when Australasia defeated the United States in the final at Forest Hills in New York – was the last time Wilding would play competitively. He was scheduled to contest the US Championships shortly after, yet he instead went into battle.

Born in Christchurch, Wilding learned the game on private courts on his family’s property. His father was a keen tennis player, and as Wilding began to make strides in the international game the pair would sometimes team up in doubles, and even won titles together.

Known commonly as “Tony”, he contested his first Wimbledon Championships in 1904 – competing there every year since except in 1909 – and made his Davis Cup debut in 1905.

Wilding’s legacy as a player also includes being one of the first to place an emphasis on health, physical fitness and training. He neither smoked nor drank – something of an anomaly at the time – and even received training advice from compatriot Bob Fitzsimmons, a heavyweight boxer.