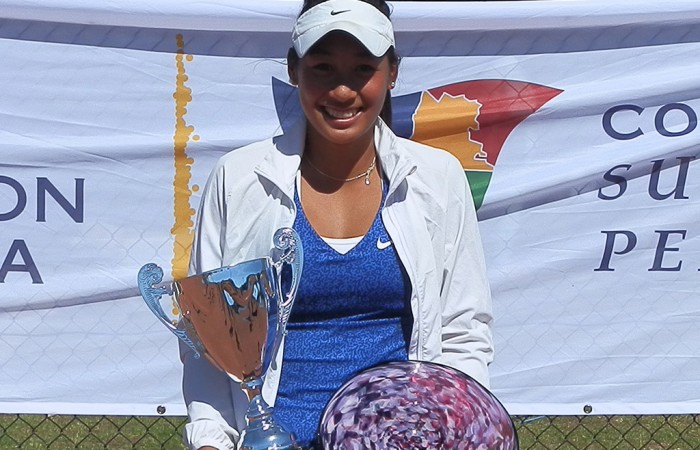 Queenslander Priscilla Hon, just 16 years of age, has come from a set down in a thrilling final to defeat top seeded Pole Sandra Zaniewska 5-7 6-3 7-6(4) and claim her first ITF Pro Circuit title at the 2015 Mornington Peninsula Women’s Tennis International on Sunday.

“I’m over the moon at the moment,” Hon said.

“Obviously you’re always aiming to win, but I was really just hoping to get some matches, play well and just improve. Winning it is just a whole different level. I really wasn’t expecting it.”

Having to qualify this week after admitting she had forgotten to enter the tournament in time, Hon swept through the field, losing her only set for the week in the final.

“In the first set, I was struggling a lot with my energy level,” she said. “But I got going after that.”

A break down in the first, Hon lifted to even the score at 5-5 but the Pole edged away again to secure the set.

It was a similar situation in the second, but this time Hon was able to maintain her comeback to level proceedings.

With neither player able to make a definitive move in the decider – Hon was unable to capitalise on a chance to serve for the match – the set was subsequently sent to a final set tiebreaker where she was able to hold her nerve.

“I was trying to be a bit of everything,” said Hon. “Changing it up with slice, attacking it when it was there.

“I think my serve was a big part. I served pretty well this whole week.”

After playing a lot of tennis in the past week, the world No.761 is planning a day off on Monday before heading to Melbourne Park for the 2015 Women’s International.

“I will stay away from tennis and tennis courts and everything,” Hon said. “I think I can refresh myself. I’m feeling pretty good.”