Sam Stosur fell to 0-6 in her career head-to-head with Flavia Pennetta following a straight-sets loss to the defending champion at Indian Wells on Monday night. 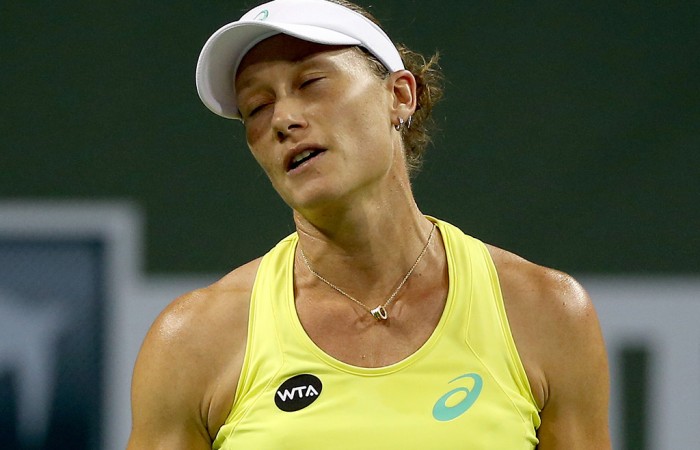 Sam Stosur has fallen to defending champion Flavia Pennetta in straight sets at the BNP Paribas Open at Indian Wells.

Meeting at the same stage of the event for the second straight year, Pennetta was again victorious, only unlike last year’s three-set tussle, this was a more comfortable 6-4 6-2 progression.

The loss takes her head-to-head record against the Italian to 0-6.

Pennetta will go on to face No.2 seed Maria Sharapova in the last 16, who overcame rival Victoria Azarenka in an entertaining match under lights at Stadium 1.

Stosur began the match brightly, moving ahead 4-3 on serve and earning points for a service break in the next game.

Yet Pennetta recovered, reeling off five straight games to take the first set and go up a break in the second.

For all of Stosur’s prowess in delivering her kick serve, Pennetta simply is not troubled by it.

The Italian routinely put the 21st seed under pressure with her returns, even managing to smite winners off the high-bouncing delivery.

Stosur managed to hold serve in the third game to momentarily halt Pennetta’s run, yet the defending champ maintained her advantage for the remainder of the set.

She broke serve again to jump out to a 5-2 lead, and comfortably served out the match in one hour and 15 minutes.