Flourishing in Nick Kyrgios' shadow of late, Bernard Tomic will step squarely back into the spotlight in Australia's bid for a drought-breaking Davis Cup win in the Czech Republic. 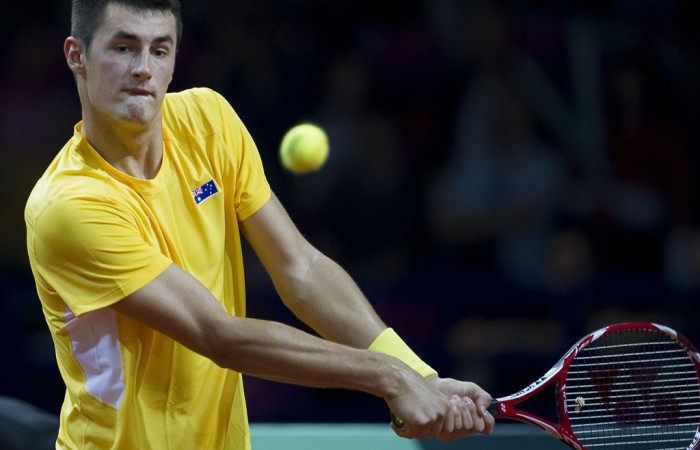 Flourishing in Nick Kyrgios’ shadow of late, Bernard Tomic will step squarely back into the spotlight in Australia’s bid for a drought-breaking Davis Cup win in the Czech Republic.

The first-round World Group tie, starting in Ostrava on Friday (Saturday morning AEDT), represents Wally Masur’s first assignment as interim Australian captain and the start of Lleyton Hewitt’s 17th and final playing campaign before he assumes the role next year.

But an in-form Tomic looms as Australia’s key man as he looks to build on one of his most consistent starts to a season and an imposing Davis Cup singles win-loss record of 12-2.

The loss of Australian No.1 Kyrgios due to a back injury has been offset by the fact the top-seeded Czechs are missing big guns Tomas Berdych and Radek Stepanek.

Australia, 28-time champions, have not won a tie in the competition’s top tier since 2006 but Masur is confident Tomic can prove the gamebreaker and help reverse the proud Davis Cup nation’s recent World Group fortunes.

“In Davis Cup, that first day is huge and Bernie is going to be pretty important to us in that sense,” said 51-year-old Masur, who was appointed captain after Pat Rafter stepped down last month.

“His Davis Cup record is excellent, he’s in good form and he’s averaging about five games a week at the moment.

“We need to try and use that on day one and see if Bernie can get the win and go from there.”

Tomic’s ranking plummeted to 124th midway through last year as he struggled back from hip surgery.

However he rebounded to win his second career ATP title in Colombia in July and has since fought back to world No.38 on the back of a strong start to the year, winning 14 of 20 matches so far.

Much of the 22-year-old’s recent progress has been relatively low-key as exciting teen sensation Kyrgios continues to hog the headlines.

And Masur is among those who believe the emergence other young Australian stars is helping, rather than hindering, Tomic.

“I honestly believe he enjoys the fact that his contemporaries are now coming along,” said Masur, who has replaced the injured Kyrgios with another shooting star in Thanasi Kokkinakis.

Tomic will be joined by either Hewitt or the higher-ranked Sam Groth in the opening singles against Lukas Rosol and Jiri Vesely.

Davis Cup legend Hewitt and big-serving Groth are likely to team up in doubles on day two, with Masur indicating no player will feature on all three days of competition.

The Czech Republic – champions in two of the past three years – appear vulnerable without world No.8 Berdych, who is skipping the competition this year, and injured veteran Stepanek.

World No.31 Rosol and 45th-ranked Vesely have also been struggling for form of late but Masur insists the hosts will be hard to beat.

“I really believe they’ll fire up because the culture in this country is such that they’re very patriotic and playing for their country tends to being out the best in them,” Masur said.

The winner of the tie faces either Italy or Kazakhstan in the quarterfinals.