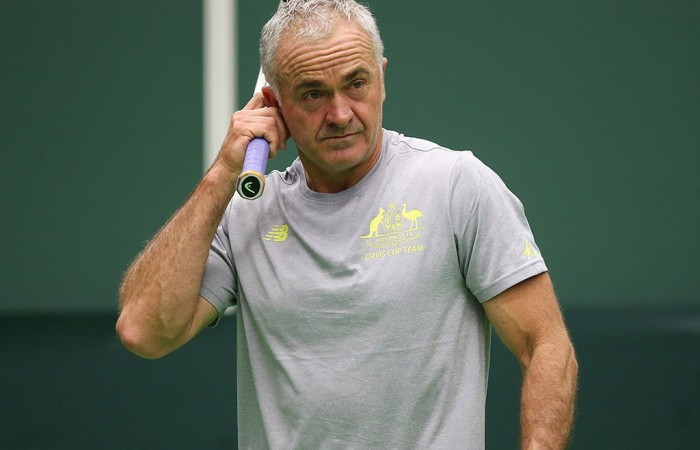 An intriguing selection headache involving the man set to succeed him as Australian Davis Cup captain awaits Wally Masur in the Czech Republic this week.

But who will join join Tomic in Friday’s opening-day singles remains undecided, with newly-appointed captain Masur tossing up between 34-year-old Davis Cup legend and captain-in-waiting Lleyton Hewitt or the higher-ranked Sam Groth.

Hewitt and Groth are likely to team up in doubles on Saturday, meaning the decision will likely come down to workload and strategy as much as form and rankings.

Masur, handed the job after Pat Rafter stood down last month, is effectively warming the captaincy chair for Hewitt, who will take on the role post-retirement early next year.

And while the final selection call is ultimately his to make, Masur says he’s working closely with Hewitt and coaches Tony Roche and Josh Eagle in deciding what’s best for an Australian team chasing a first World Group victory since 2006.

“You’re going to ask questions of (players like Hewitt) and get their feedback because it’s pretty valuable,” Masur told AAP.

“I’d be mad to try to come in here and try and absolutely stamp my authority on the team because that would be counter-productive.”

Hewitt, the most prolific winner in Australian Davis Cup history, has missed the opening-day singles just twice in his record 17-year career in the competition.

However, big-serving 27-year-old Groth, ranked 29 places higher than Hewitt at No.69 in the world, has improved out of sight over the past year and defeated Hewitt in straight sets in Brisbane in January.

The pair have been playing practice matches in training all week, along with Kyrgios’ replacement Thanasi Kokkinakis, and Masur said a decision on the final make-up of the team wouldn’t be made until Thursday.

“One of the great things is, we’ve a very versatile team,” Masur said.

The 2012 and 2013 champion Czechs are the competition’s top-ranked team, but look vulnerable without world No.8 Berdych and wily veteran Radek Stepanek.

However, Masur insists a team led by 31st-ranked Lukas Rosol and world No.45 Jiri Vesely will be very hard to beat at home.

“They’ve got such a good tradition and culture around Davis Cup and the fans will create quite an atmosphere,” he said.