Novak Djokovic has rewritten tennis history with yet another Australian Open final triumph over Andy Murray at Melbourne Park. 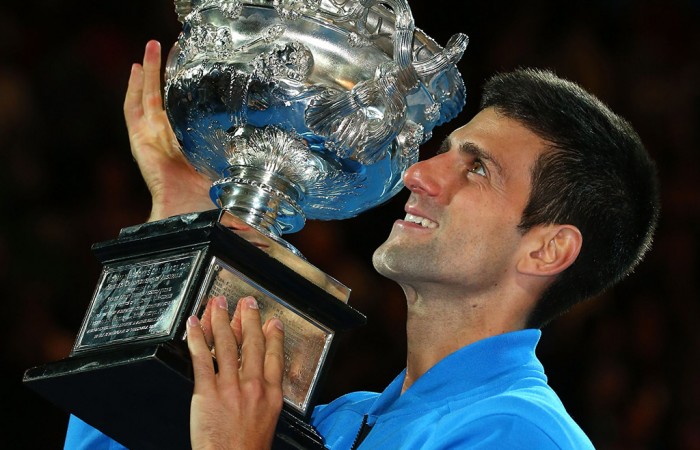 Novak Djokovic has rewritten tennis history with yet another Australian Open final triumph over Andy Murray at Melbourne Park.

The Serbian superstar is the first man in 47 years of professional tennis to snare five Australian Open crowns, his victory also consigning Murray to a more dubious place in the record books.

After also succumbing to Djokovic in the 2013 and 2011 finals and to Roger Federer in 2010, the vanquished Scot is the first man in the open era to lose four title matches at Melbourne Park.

Djokovic, though, can bask in the glory of his eighth career major, joining Andre Agassi, Ivan Lendl, Jimmy Connors, Ken Rosewall and Fred Perry on the all-time Grand Slam leaderboard.

Elated to have won his first major since becoming a father for the first time in October, Djokovic congratulated Murray and fiancee Kim Sears on their engagement.

“I wish you and Kim many kids,” he said.

While Murray had upstaged Djokovic in their past two grand slam final showdowns, at the 2012 US Open and Wimbledon the following year, Sunday night’s clash of the lifelong friends and rivals followed a more familiar script.

Just like two years ago in Melbourne, Djokovic and Murray split the first two sets in tiebreaks before the Serbian ironman careered away in the third and fourth to take the title.

Djokovic made a flying start to the match, breaking Murray in the fourth game and then showcasing his improved net play to save three break points to consolidate for 3-1.

But with both players struggling serving into the wind from the river end, the top seed handed back the break back and then faltered again trying to serve out the opening set at 5-4.

He finally snared the set in a tiebreaker after Murray squandered a mini break with three sloppy unforced errors.

Djokovic was troubled midway through the first set by a right thumb injury from a fall but shook off the discomfort to seemingly seize control of the final after breaking Murray for a third time to grab a 2-0 lead in the second set.

The Scot, though, benefited from a five-minute stoppage while security staff dealt with court intruders to break back immediately upon the resumption to level at 4-4 and then conjure a set point on the Serb’s serve.

Djokovic held firm but Murray rolled through the second-set tiebreaker, delivering a withering forehand return on set point to square the match up after more than two-and-a-half hours of ebbing and flowing.

Not for the first time in his grand slam history, Djokovic appeared to be struggling physically, clumsily losing his footing on several occasions and lamely dropping serve again early in the third set.

But Djokovic roared back to life, seizing five of the next seven games as a Murray meltdown – in the form of a racquet smashing effort after double-faulting on break point – handed Djokovic an ominous two-sets-to-one lead.

The final was as good as over after the world No.1 jumped out to a double-break lead in the fourth and he closed out the championship with another brutal bagel, just as he had in finishing off defending champion Stan Wawrinka in his semifinal.

Despite the defeat, Murray will return to the world’s top four on Monday after slipping to as low as 12th last year following a tough recovery from back surgery in late 2013.

The Brit thanked his oft-maligned coach Amelie Mauresmo for putting him back on track.

“We put in a lot of hard work to try and get back in this position after what was a difficult year,” he said.

“I’ll try and come back next year and hope to have a slightly different outcome in the final.”