Serena Williams has continued her relentless march to sporting immortality with another demoralising Australian Open final triumph over Maria Sharapova. 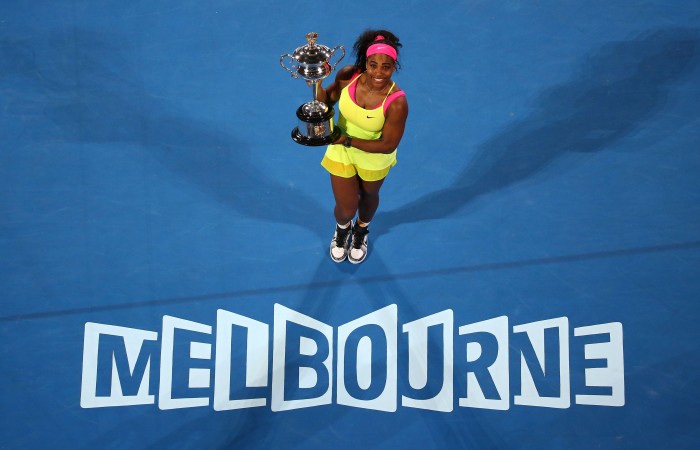 Serena Williams has continued her relentless march to sporting immortality with another demoralising Australian Open final triumph over Maria Sharapova.

Adding another chapter to tennis’s most one-sided rivalry, Williams outclassed the Russian 6-3 7-6 (7-5) on Saturday night to clinch a record sixth Open crown and the 19th grand slam title of her illustrious career.

“Growing up, I wasn’t rich but I had a family rich in spirit and support,” Williams said.

“Standing here with 19 majors is something I never thought would happen. I went on the court with a ball, a racquet and a hope, and that’s all I had.

“Never give up because you never know what can happen and who you can inspire and influence.”

Commentating for ESPN, Evert backed Williams to land at least three more to catch Steffi Graf’s open-era record haul of 22 majors “if she stays healthy, if she stays motivated”.

The blockbuster final was billed as the first title showdown in more than 11 years featuring the world’s top two players, but Williams swept to glory in straight sets in one hour and 51 minutes.

The victory – her 16th in a row over the Russian – repeated Williams’ 6-1 6-2 mauling of Sharapova in the 2007 decider at Melbourne Park and, yet again confirming her love of the big stage, was the all-conquering American’s 11th straight tour final win.

Williams is also now six from six in Australian Open finals and she hasn’t lost a grand slam title match of any sort since Samantha Stosur somehow defeated the home favourite in New York on the 10th anniversary of the 9/11 terrorist attacks.

No matter what the surface, nor the colour – grass, cement, green clay, red clay, Rebound Ace and now Plexicushion blue – Williams has owned Sharapova for more than a decade.

The Russian pin-up may be the most-photographed and highest-earning female on the planet, but Williams is rapidly becoming the most successful women’s athlete of all time.

The 33-year-old is the oldest Open champion of the professional era, yet the ageless champion is showing no signs of slowing down.

Williams has now won six of the past 13 majors since turning 30 and, even more remarkably, since recovering from a life-threatening blood clot on her lungs in 2011.

The game’s fiercest competitor spent almost 12 months laid up after slashing her foot celebrating her 2010 Wimbledon triumph and then suffering a pulmonary embolism before her extraordinary renaissance.

“I was on my death bed at one point, quite literally,” Williams recalled after the terrifying ordeal.

The world No.1 spent much of the past fortnight in bed too, fighting a nasty head cold that led to a coughing fit during a 15-minute rain stoppage in the opening set on Saturday night.

But after a quick consultation with the tournament doctor, Williams returned to Rod Laver Arena and its closed roof to peel off the next six points to continue where she’d left off.

Sharapova rode an unbeaten 10-match winning streak into the final, but Williams wasted no time showing once more who’s boss in a head-to-head “rivalry” the American now leads 17-2.

Stalking Sharapova’s timid second serve like a lioness, Williams clubbed a ferocious forehand return winner and then broke the second seed on a double-fault in the opening game of the match.

Sharapova steadied and briefly threatened to get back on serve until the stoppage seemingly stalled her fightback with Williams serving at 4-2 and 30-all.

But instead of breaking back on the resumption, Williams reasserted her superiority to surge ahead 5-2 before closing out the first set with another crunching backhand winner.

Unbeaten in 16 previous grand slam finals after pocketing the opening set, Williams was never going to yield as she eyed Open title No.6.

Sharapova saved two match points but the delay was was nothing more than a stay of execution as the world No.1 kept her cool and thundered down her 18th ace to seize the tiebreaker – and the trophy.

In addition to having her name engraved on the Daphne Akhurst Trophy once more, Williams pocketed a cheque for $3.1 million, taking her career prize money to a staggering $85.86 million.

Sharapova can console herself with $1.55 million for making her fourth final at Melbourne Park.

“I’ve got to congratulate Serena on creating history and playing some of her best tennis,” Sharapova said.

“It’s an honour playing against her.”