Two starstruck locals will take on the might of No.7 seeds Martina Hingis and Leander Paes at the Australian Open on Sunday. 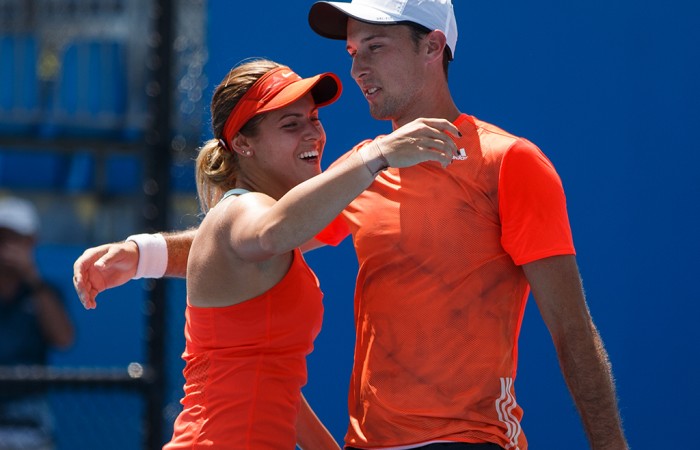 Two starstruck locals will take on the might of No.7 seeds Martina Hingis and Leander Paes at the Australian Open on Sunday.

The once-in-a-lifetime opportunity for Sam Thompson and Masa Jovanovic came about after Tennis Australia ran a national competition, open to anyone who cared to enter, with the grand prize a wildcard into the mixed doubles draw at Melbourne Park.

The Victorian pair hadn’t played together before entering the competition and now find themselves on the verge of achieving lifelong dreams.

“I’m not sure whether I’m nervous or excited or both – it’s pretty unbelievable,” Thompson said.

“I think we were both a bit shocked when we drew Martina and Leander in the first round. It will be awesome, though.”

Thompson, 21, is an amateur player who works part-time in the cafe at the Boroondara tennis centre while completing a Masters in Mathematics at Melbourne Uni and Jovanovic, 20, achieved a WTA ranking before suffering a major shoulder injury and currently plays on the Challenger circuit.

Both are hopeful their experience at the Australian Open will provide huge boosts to their respective careers and are determined not to disappoint the dozens of family members and friends set to cheer them on as they attempt a shock upset.

“I think the adrenalin will kick in once we get out there,” Jovanovic said.

“We just want to go out there and give it our all. We’ll see what happens.

“If we do well against them it would be just awesome. We’d be over the moon if we won.”