Resurgent Sam Groth feels he belongs on the big stage after his best ever Australian Open performance came to the end in the third round. 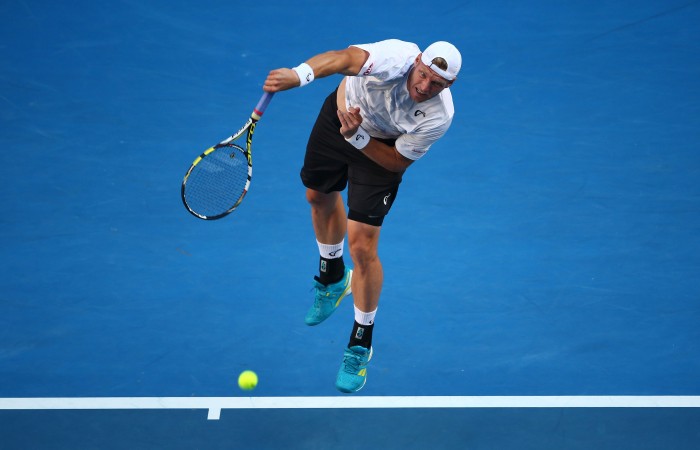 Resurgent Sam Groth feels he belongs on the big stage after his best ever Australian Open performance came to the end in the third round.

Groth hadn’t won a match at Melbourne Park before this tournament but looked right at home despite a loss to fellow Australian Bernard Tomic 6-4 7-6 (10-8) 6-3.

The late-blooming Groth, who temporarily quit tennis to play Australian Rules football with his mates, said the third round showing at the Open had been a big step forward.

“I had a good summer: quarters in Brisbane; third round here.

“If you said that to me at the start of the year I’d probably take it but this is where I want to be,” the 27-year-old said.

After enduring the hard slog of the second tier ATP Tour challenger circuit since 2007, Groth said he hoped to enjoy some spoils of the main tour that came with a career-high ranking of No.87.

He said he would make the main draw of a number of ATP tournaments including Miami, Quito, Memphis, Delray Beach, Acapulco and hopefully Indian Wells.

“You play tennis to play the top level.

Boasting the fastest serve in the game, it was actually his strike weapon that let him down against Tomic when he needed it most.

Groth created the first set point in the second-set breaker, but he double-faulted at the worst possible time.

“That was definitely my chance,” he said.

“I let him off the hook a couple times when I shouldn’t have.

“He didn’t have to do a hell of a lot in those big moments to beat me. I unfortunately beat myself at those times.

“Hopefully if I keep putting myself in those situations, I will come out on top more than I lose.”