There'll be no repeat of Casey Dellacqua's 2014 charge to the second week of the Australian Open after she was defeated by big-hitting American Madison Keys on Thursday. 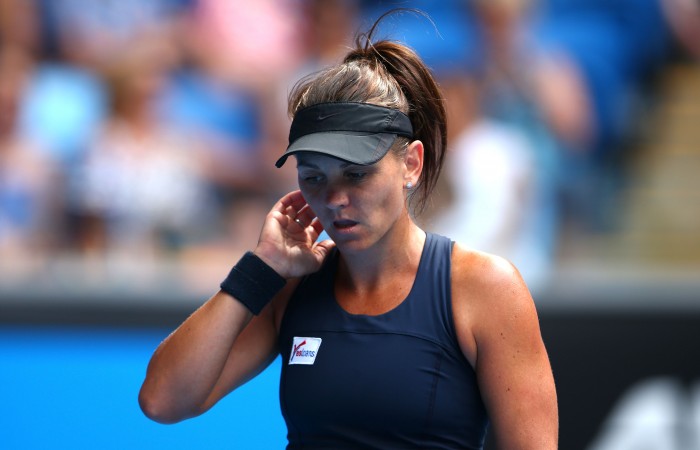 There’ll be no repeat of Casey Dellacqua’s 2014 charge to the second week of the Australian Open after big-hitting Madison Keys sent her packing on Thursday.

Dellacqua was on track after winning the opening set before the match turned in a twinkling early in the second.

Serving at game point in the second game of the set, Dellacqua watched on in dismay as a fluky backhand return flick from Keys landed in at a ridiculous angle for a winner.

The American went on to win the game before finding her range with her powerful groundstrokes and going on to dominate.

One of the brightest young stars in women’s tennis, the 19-year-old world No.37 won 11 of the last 13 games to march into a third round in 87 minutes.

Ajla Tomljanovic’s fleeting grand slam run as an Australian is also over – for now anyway.

The Zagreb-born, Florida-raised, Brisbane-based import bowed out of the Open earlier on Thursday with 6-1 7-6 (7-1) second-round loss to American Varvara Lepchenko.

Tomjlanovic was blown off court in the opening set before putting up a fight in the second, only for the 30th seed to race through the tiebreaker and take out the adopted Aussie.

Tomljanovic played the Open under the Australian flag but will revert to Croatian for regular tour events until her residency is processed.

The 21-year-old will, though, represent Australia at the French Open and Wimbledon, with the ITF recognising her Aussie status at the majors.

Samantha Stosur, the tournament’s 20th seed, will face American Coco Vandeweghe on Rod Laver Arena after Hewitt takes on German Benjamin Becker for a place in the third round.