Lleyton Hewitt slipped up in the second set, but recovered in vintage style as he became the 10th local to bustle into the second round of the Australian Open. 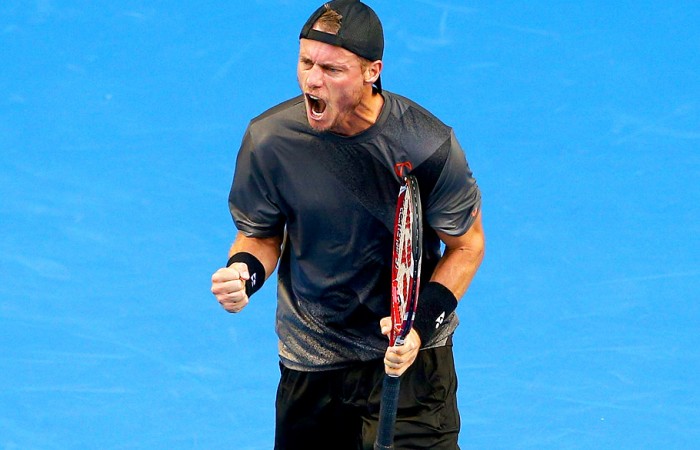 Lleyton Hewitt slipped up in the second set, but recovered in vintage style as he became the 10th local to bustle into the second round of the Australian Open.

Hewitt started his 19th consecutive title tilt at Melbourne Park on Tuesday, with a 6-3 1-6 6-0 6-4 win over Chinese wildcard Zhang Ze in two hours and 20 minutes.

He next faces German Benjamin Becker, the man who ended Andre Agassi’s career at the US Open in 2006.

“I knew I was going to have ups and downs during the match, but I had to weather the storm,” Hewitt said.

“He played too well in that second set and it was important to change the momentum.”

It is the first time since 2000 that so many Australians have made it beyond the first round in their home grand slam.

“It’s starting to get back like the good old days, it’s fantastic,” Hewitt said.

“There’s a lot of good players coming through.”

Hewitt was fully expected to progress to the second round, given Zhang is ranked exactly 100 places below him at No.187.

But the 33-year-old was far from convincing early on, starting the match with two serves that thundered into the net.

As pundits pondered whether this could be Hewitt’s last Rod Laver Arena outing, the former world No.1 offered up three erratic ball tosses in a row.

Hewitt laughed at himself, steadied to hold serve then swapped breaks with Zhang.

A double-fault from Zhang handed Hewitt a 5-3 lead in the opening set, but he rattled the veteran with two breaks to take the second set.

The response from the 2005 runner-up was definitive – Hewitt dropped one of the next 13 points and served excellently to close out the third set in 26 minutes.

The fourth set looked to be heading in a similar fashion as Hewitt roared to a 4-1 lead.

Zhang won the next three games, having had a chance to collect his thoughts during a medical timeout due to a nose bleed.

The pressure came on Zhang when he needed to hold serve to stay in the tournament.

The 24-year-old saved four match points, but not a fifth when his return went long.

It is the first time since 2012 that Hewitt has progressed to the second round in Melbourne.

Hewitt was short of match fitness, having lost to Sam Groth at the Brisbane International in his only hit-out of the year.