Casey in a canter

Casey Dellacqua is safely through to the second round of Australian Open 2015 after a routine 6-4 6-0 victory over Yvonne Meusburger, playing the last match of the Austrian’s professional career. 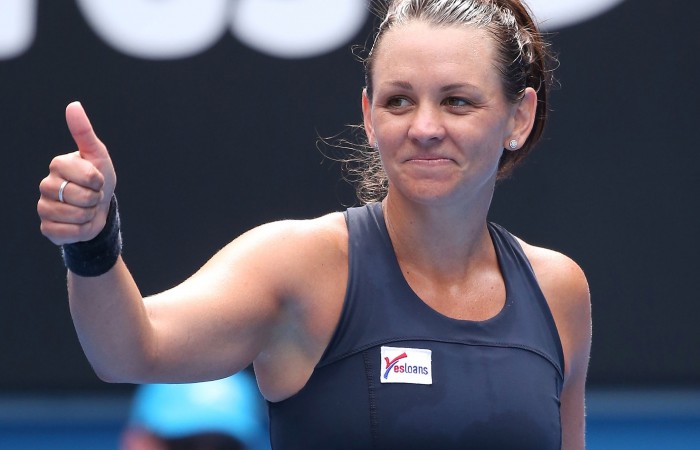 Casey Dellacqua is safely through to the second round of Australian Open 2015 after a routine 6-4 6-0 victory over Yvonne Meusburger, playing the last match of the Austrian’s professional career.

Australian No.2 Dellacqua, seeded for the first time in Melbourne, overcame a shaky finish to the opening set and some indifferent serving to book her place in the second round after surging to victory in 62 minutes.

In the face of some disappointing results in the lead-up to the Australian Open, 29th-seed Dellacqua talked fervently about trusting in the process of arriving in Melbourne match-ready rather than focusing on results. Her three Hopman Cup defeats came against formidable opposition, she said, and her second-round exit in Hobart was nothing to be concerned about.

The process couldn’t be faulted against Meusburger, though she still has some way to go to say she has truly hit her peak form.

“It’s nice to get the win,” Dellacqua said. “I was nervous when I came out here – I love playing in Australia, I want to perform and perform well.”

For Austria’s Meusburger, that’s all she wrote. Despite reaching a career-high ranking of No.37 in 2014, the 31-year-old announced her retirement after a first-round exit at last year’s US Open. Having qualified for the Australian Open, however, she could not resist one last trip to Melbourne, where she made her Grand Slam debut in qualifying in 2005.

With the sun breaking through the clouds above Margaret Court Arena and the fans in good voice, there are worse ways to bow out of the game. Meusburger certainly enjoyed her last moments as a professional tennis player, at times nodding along with the Fanatics’ chats between points.

Dellacqua made a bright start, firing full-blooded backhands past Meusburger to open up a 3-0 lead. The Austrian was understandably off the pace in her first competitive match in almost five months, but capitalised on some loose Dellacqua serving to grab a couple of breaks late in the first set.

The blip merely served to delay the inevitable. Dellacqua was ruthless on return, dropping just two of 17 points when facing a second serve and firing 25 winners all told. Meusburger did what she could to get a game on the board, coming closest as Dellacqua served to move 5-0 up, but the 29-year-old Australian held firm to close out the second set in 21 minutes before sharing a touching moment with the re-retired Meusburger at the net.

A sterner examination awaits Dellacqua in the second round, be it against Lesia Tsurenko of Ukraine or American Madison Keys, but she showed glimpses of what she is capable of at MCA on Tuesday. Dial in that serve and overcome those nerves, and the Perth native could give the Fanatics something to sing about once more.