An ecstatic Sam Groth celebrated his maiden Australian Open win on Monday night by taking a selfie with the Fanatics. 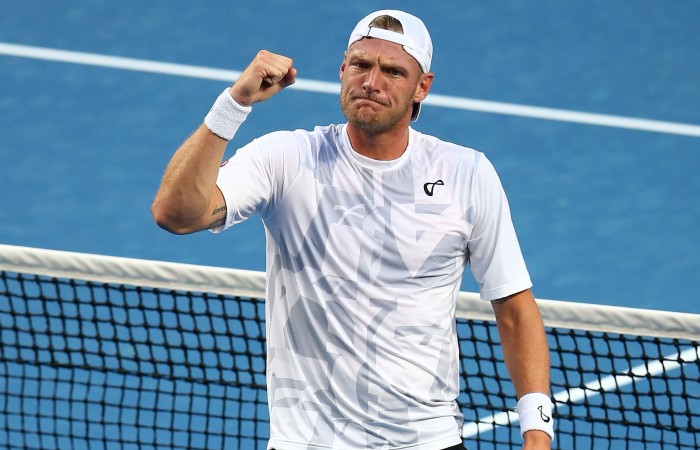 An ecstatic Sam Groth celebrated his maiden Australian Open win on Monday night by taking a selfie with the Fanatics.

The late-blooming Groth continued his remarkable rise from suburban Australian Rules footballer to grand slam force with a 6-3 7-6 (7-4) 6-4 win over Serbia’s Filip Krajinovic.

It was Groth’s first-ever win at Melbourne Park and followed his twin breakthroughs last year at Wimbledon and the US Open.

The 27-year-old qualified for the main draw at the All England Club for the first time and then reached the second round at Flushing Meadows.

Groth won over Roger Federer in New York with his entertaining old-school serve-volley display against the 17-times major winner and drew an army fans at Hisense Arena for his clash with Krajinovic.

“Thankfully my serve held true and I started to build pressure,” Groth said.

He said his spontaneous celebration with the Fanatics was a thank you to Australia’s unofficial sporting cheerleaders.

“I live in Melbourne now and I’ve never had great runs in the past, so thanks for coming out and supporting me,” he said.