Marinko Matosevic and Jarmila Gajdosova are no longer Australian Open hard-luck stories after both registered their maiden wins at the tournament on Monday. 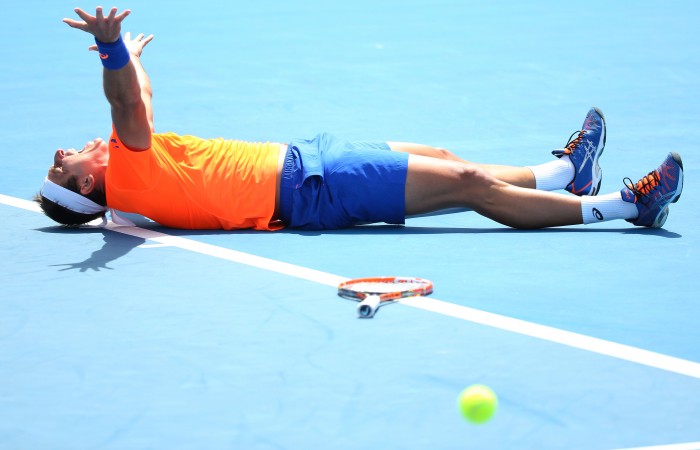 The local duo broke long singles losing streaks in contrasting styles at Melbourne Park on Monday and neither made any effort to disguise their relief.

Gajdosova’s 6-3 6-4 victory over Romania’s Alexandra Dulgheru was her first at the Open in 10 successive attempts, while Matosevic came from two sets to one down to outlast Russian qualifier Alexander Kudryavtsev 6-4 6-7 (5-7) 4-6 7-5 6-3 in a match lasting almost three-and-a-half hours.

The Bosnian-born Matosevic collapsed backwards onto the court and then roared with delight after snapping a five-match losing run at his home grand slam.

It was only his third victory in 18 grand slam matches spread over six years.

Such was Gajdosova’s relief at finally breaking her Open duck, she told coach Chris Johnstone it felt like she had won the whole tournament, rather than just the first round.

“It’s been such a long time coming,” she said.

“Not to be able to do it in your home grand slam was very devastating for me.

“I was very happy and relieved that I got this monkey off my back.

“I do love playing in Australia and I’ve played well the last couple of weeks.

“I’ve won the mixed doubles here, made semis in doubles, won Hobart, made quarters in Brisbane – so I play well here and I can play well here.

“I’m just very happy that the one tournament in my whole career I couldn’t break, I finally did.

“Whatever is going to happen from now on, I’m just going to enjoy it and play the best I can.”

What happens next is a first clash against Romania’s world No.3 Simona Halep, who eased past Italy’s Karin Knapp 6-3 6-2.

Matosevic also has a brutally tough second-round encounter against close friend and No.6 seed Andy Murray, who brushed aside India’s Yuki Bhambri 6-3 6-4 7-6 (7-3).

Murray said Matosevic was clearly a much more relaxed figure after winning a grand slam match for the first time last year at Roland Garros.

“It was a tough day at the office and I felt like I was playing like some of my worst tennis, but somehow I found a way to win.”

Kudryavtsev complained to the chair umpire about the vocal crowd after dropping the fourth set, but Matosevic insisted they had not stepped over the line.

The feisty Sydneysider savoured the victory by kissing the court.

Storm Sanders was the first Australian casualty at the Open, falling 7-5 6-3 to Czech Klara Koukalova, while fellow wildcard recipient Arina Rodionova was belted 6-0 6-3 by Monica Puig from Puerto Rico.

Wildcard playoff winner Jordan Thompson also fell at the first hurdle, bowing out 6-4 7-6 (7-5) 6-4 to Portugal’s Joao Sousa and countryman John Millman was outclassed 6-3 6-3 6-2 by No.26 seed Leonardo Mayer from Argentina.