Roger Federer fought his way to a tough win over Lleyton Hewitt in the Fast4 tennis exhibition on Monday night. 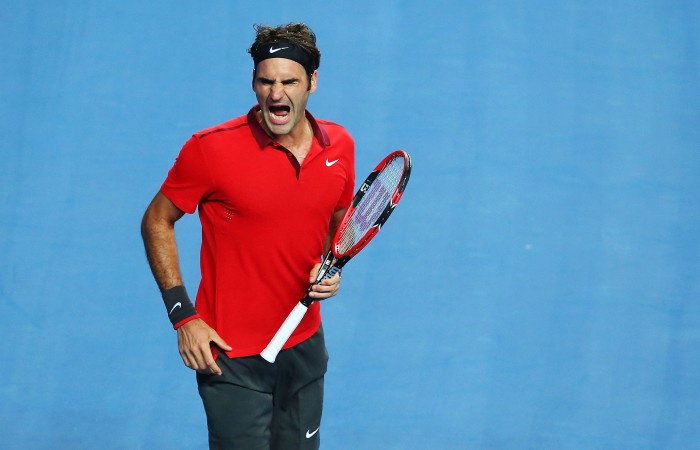 It may have been a new format but it was the same old rivalry as Roger Federer fought his way to a tough win over Lleyton Hewitt in the Fast4 tennis exhibition on Monday night.

The Swiss world No.2 continued his unbeaten run this summer with a 4-3 2-3 3-4 4-0 4-3 win over the Australian in the short-form contest at Sydney’s Qantas Credit Union Arena.

Coming off a four-match winning run in Brisbane, where he took the title in three sets over Milos Raonic on Sunday night, Federer showed no ill-effects from a morning flight and marketing commitments earlier in the day.

The match featured an experimental style of play with sets being won after four games, no deuces and play being allowed to continue after lets on serve.

Federer, who holds an 18-9 match record over Hewitt in regular match formats, was pushed all the way by his evergreen sparring partner, the contest going its full allotment of five shortened sets.

Both players looked in good touch, Hewitt offering plenty of “too goods” to Federer in the first set and a half before the world No.86 found some rhythm to get back into the contest.

Hewitt, who lost in the opening match of the Brisbane International against compatriot Sam Groth in his only other hitout of the year thus far, will now head to his hometown of Adelaide to play an exhibition match against Czech Tomas Berdych to round out his formal preparations for the Australian Open.

Federer is expected to head straight to Melbourne for the year’s opening grand slam.

Federer and Hewitt both said they could see a future for the format but were reserved about whether it would take off at the top level.

“You can know that the maximum length of the match is probably going to be an hour 45, it seems like,” Federer said.

“And that mentally is a good thing to know. You don’t have to pack seven shirts, you might only have to pack four shirts … it’s a more controlled environment, especially if there is a lot of heat and it is humid – that could possibly keep guys in the game for a little bit longer.”

Given the loss of courts in Australia and increasing competition from a range of sports, Hewitt was all for anything that got people interested in tennis.

“It’s about getting more people playing the game,” he said.

“It’s not just the juniors, it’s social tennis as well. Getting people talking about tennis is a big thing: to try and pump up tennis in Australia.”