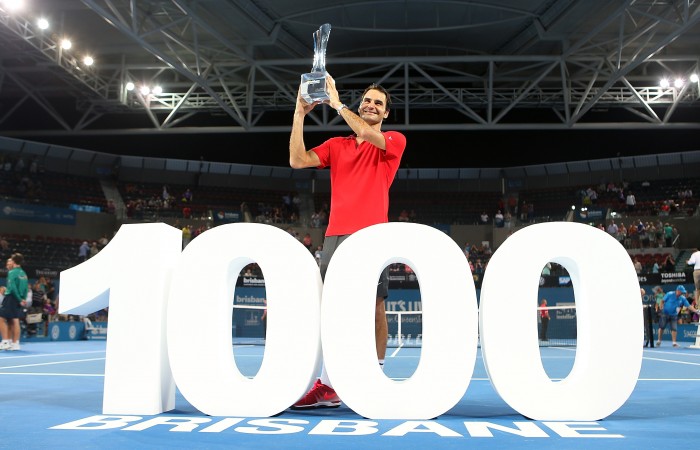 There were 1,000 reasons why top seed Roger Federer wanted to win the Brisbane International men’s final on Sunday night.

But it seems there are few excuses for the Swiss great if he does not add to his staggering 17 grand slam tally at the Australian Open judging by the world No.2’s triumph in the Brisbane decider.

Federer appeared to be a marked man ahead of the year’s opening grand slam after third seed Raonic backed fellow young gun Kei Nishikori’s call that the days of the “big four” – Federer, Rafael Nadal, Novak Djokovic and Andy Murray – were numbered in 2015.

World No.5 Nishikori tipped the likes of himself, reigning US Open champ Marin Cilic, big-serving Raonic and Federer-clone Grigor Dimitrov to take the next step in 2015.

And it was an argument that appeared to gain momentum after Djokovic and Nadal suffered surprise losses this week at the Qatar Open in Doha.

However, Federer has done his best to silence the critics by holding out the likes of world No.11 Dimitrov and third seed Raonic on his way to clinching Brisbane glory.

Apart from his four grand slams Down Under, the Swiss great has made at least the semi-final round at Melbourne Park every year since 2004.

Federer bounced back from a rollercoaster Brisbane second round win over Australian wildcard and world No.153 John Millman by conceding just five games in two matches before Raonic’s challenge.

While Federer’s win was an ideal tonic ahead of the Australian Open, it also avenged his shock 2014 Brisbane final loss to former world No.1 Lleyton Hewitt.

Sunday’s success means Federer has triumphed in 29 cities around the world in his stellar career.

But after extending his head-to-head record over Raonic to 8-1, Federer will be solely focused on winning in one city only – Melbourne at the Australian Open.

Federer broke in the third game before clinching the first set in just 31 minutes.

And it seemed all over when the Swiss master broke again in the opening game of the second before Raonic found another gear.

The big-hitting Canadian broke back in the fourth game before forcing a tiebreak which he went on to dominate 7-2.

Federer finally ground down Raonic, breaking him in the 10th game of the third to clinch the decider in more than two hours.

It was still a gutsy effort by Raonic, 24, who became the first Canadian to finish the year in the top 10 after a breakthrough 2014 in which he made the Wimbledon semi-finals and French Open quarters.

Federer was awarded the winner’s Roy Emerson Trophy by the 12-time grand slam winner himself before receiving a special memento from the great Rod Laver to celebrate his 1000th win.

“This is a special moment, obviously,” Federer said.

“To receive this from you guys – I will never forget this match.”

Raonic admitted he almost got caught up in the sentiment in the lead-up.

“When they announced his achievements in the warm-up it sounded like he was aiming for his 2000th win – you need to step up,” the Canadian laughed.