World No.2 Roger Federer and Australian great Lleyton Hewitt were in Sydney on Monday to help Tennis Australia launch FAST4, a fast format created for those who don’t have time to play traditional tennis. 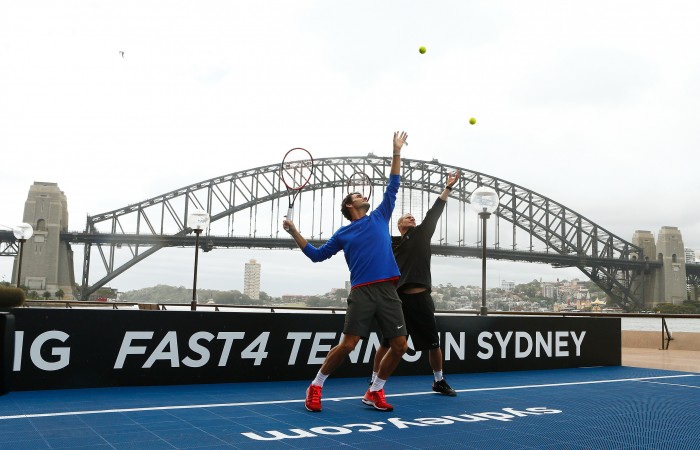 Ahead of its global launch with Swiss tennis legend and current World No.2 Roger Federer and Australian great Lleyton Hewitt in Sydney tonight, Tennis Australia is excited to announce FAST4, a fast format created for those who don’t have time to play traditional tennis.

The fundamentals of the game remain the same, but four innovative new rules ensure tennis matches are fast, competitive, exciting and can be completed in a shorter period of time.

Tennis Australia’s Director of Participation, Craig Morris said that to have Roger Federer and Lleyton Hewitt launch the new fast format in this world-first opportunity for Sydney was not only special for Australia, but for tennis around the world.

“Designed with the time-crunched player in mind, FAST4 means that anyone anywhere will have time for tennis, and we aim to attract new people to the sport through this format,” Craig Morris said.

“To have Federer, one of the greatest players of all time and Hewitt, our own great Australian champion, showcase the format for the first time is exciting, and we are proud to launch FAST4 after three years of development,” said Morris.

Arriving in Sydney following his historic 1000th match win at the Brisbane International, Federer joined Hewitt for a friendly hit set against the spectacular backdrop of Sydney Harbour. Federer served to Hewitt at McMahon’s Point, and the pair traded volleys as they sped under the Harbour Bridge on speed boats, before finishing off the match on the forecourt of the iconic Sydney Opera House.

Fourteen-time Grand Slam champ Rafael Nadal will then showcase FAST4 in Melbourne At The Summer Set on Wednesday 14 January at Margaret Court Arena. Nadal will play a set each against reigning US Open Junior champion Omar Jasika and Australian Davis Cup hero Mark Philippoussis, then play best-of-five against his great friend and rival, former world No.7 Fernando Verdasco. Both matches will be broadcast live in Australia on the Nine Network from 7.30pm local time.

Tennis fans in Adelaide will get a taste of the action when past and current stars including John McEnroe, Goran Ivanisevic, Michael Chang, Marcos Baghdatis and Mikhail Youzhny play the FAST4 format at the World Tennis Challenge. And at the Apia International Sydney on Saturday 17 January, Pat Rafter will take to the court against John McEnroe in a special FAST4 match.

At the Australian Open next week, the popular legends event will feature the FAST4 format, as will the finals of the Asia Pacific Tennis League finals taking place during the second week.

FAST4 is tennis is those who don’t have time to play tennis.

It’s a fast and fun format to attract new and current players who want tennis to fit into their busy lifestyle. FAST4 does not replace traditional tennis, it is designed to complement it.

The FAST4 format has been developed and successfully piloted in Australia for three years at all levels, from Hot Shots to the Asia-Pacific Tennis League. Champions such as Pat Rafter, Nick Kyrgios, Sam Groth and Casey Dellacqua have all enjoyed playing this format, as have regular club players.

To find out more visit www.fast4.com