Baghdatis all smiles in Happy Valley

Second seed Marcos Baghdatis is through to the final of the City of Onkaparinga Challenger 2015 after ending the dream run of Aussie qualifier Andrew Harris. 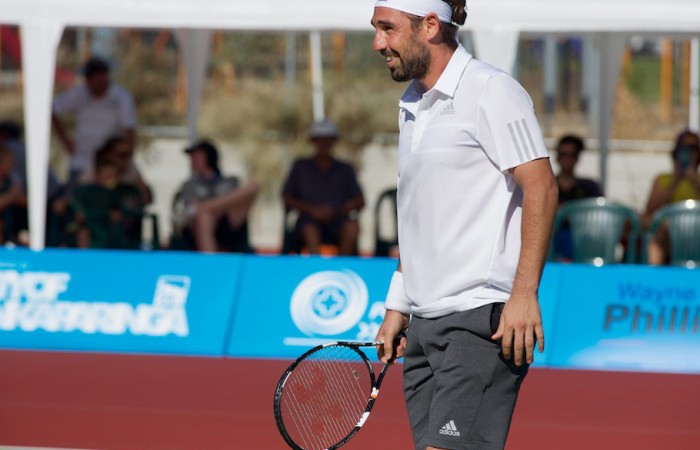 Second seed Marcos Baghdatis is through to the final of the City of Onkaparinga Challenger 2015 after ending the dream run of Aussie qualifier Andrew Harris 6-4 6-4 in difficult conditions at Happy Valley on Saturday.

He will now face Ryan Harrison in the final tomorrow after the unseeded American defeated local wildcard Alex Bolt 6-3 6-3.

“The last two matches have been tough – very cold, very windy,” Baghdatis said. “But I am finding a way to win and that’s the important thing.”

Harris, ranked world No. 654 leading in to the tournament, was unknown to Baghdatis prior to today – a familiar theme for the 29-year-old after he faced another local qualifier in Andrew Whittington earlier in the week.

“It’s not so easy, because you don’t know how they play,” Baghdatis said. “They have nothing to lose, so I guess playing me, they can just go for their shots.”

As it was, Baghdatis got the jump early in the match against a slightly shaky Harris but the young Victorian rallied well, going ahead a break early in the second set. However, the Cypriot recovered in time and was able to seal the match in straight sets.

For Harris – who will now crack the top 500 for the first time when rankings are released next week – the match forms part of an important learning curve.

“It was just a great experience to play someone like Marcos,” he said. “He made me work for every single point.

“Obviously I’m a bit disappointed after the match but it’s just been a great week. I’m really happy,” he added.

The match-up against Harrison on Sunday will put Baghdatis in much more familiar territory.

“I know him well,” he said. “He’s a great young player. It should be an interesting match.”

The former Australian Open finalist and world No.8 is currently sitting at No.82 and he discussed the reason behind his decision to play in Happy Valley.

“Last year I didn’t play so much,” he said. “I played well in the last six months but I still need to improve my game.”

“I wanted to play at the Challenger level so I can work on some things without so much pressure,” he added. “That’s where I came from when I was younger and so I am trying to come back the same way and go back to the basics.

“I’m spending the time on court and getting ready for the Aussie Open.”

Baghdatis also said he was enjoying his first stay in Adelaide. “We are having fun,” he said. “Lots of things to do and I am having a great time.”