Great Britain defeated Australia in their final tie of the 2015 Hopman Cup on Friday night in Perth. 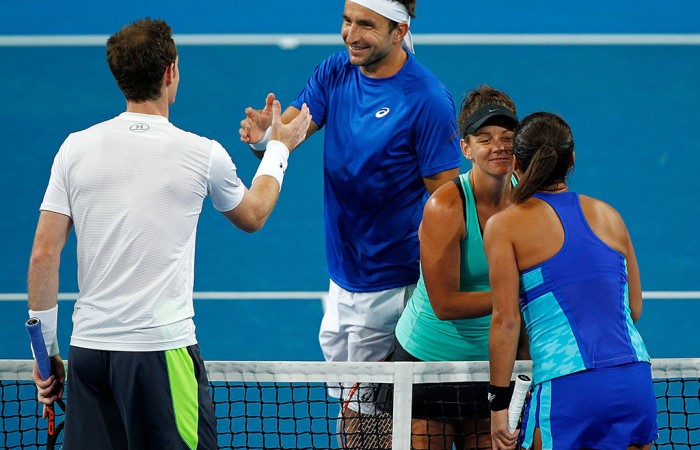 Great Britain made short work of Australia at the Hopman Cup on Friday night with Andy Murray and Heather Watson scoring straight-sets wins over Marinko Matosevic and Casey Dellacqua.

Neither team could make Saturday’s final at the Perth Arena heading into the last round-robin tie of the week, but Australia finished the 2015 tournament without a victory.

The evening session began with world No.50 Watson beating the 29th ranked Dellacqua 6-3 6-4 in just 101 minutes leaving the West Australian winless for the Hopman Cup after both women had lost their earlier matches to France’s Alize Cornet and Poland’s Agnieszka Radwanska.

That left Matosevic with the lofty task of challenging world No.6 Murray and, after a competitive first set, the Brit won the last three games and then the first four of the second set to win the match 6-3 6-2 in 69 minutes in front of a week-high crowd of 13,077.

The win was Great Britain’s second this week after beating France’s Cornet and Benoit Paire, but losing to Poland’s Radwanska and Jerzy Janowicz cost them a place in the final.

Watson scored her first singles win in impressive fashion while Dellacqua wasn’t too disappointed about her winless campaign.

“At this point of the year it’s not about the end result, it’s about my performance based on tactics and a lot of different elements,” Dellacqua said.

“Obviously it’s always nice to win and you always want to get a win on the board, but unfortunately I have lost three matches this week and that’s the nature of our sport. I just move on to the next week now and look to improve in Hobart.”

Murray had an outstanding week with straight-sets wins over Janowicz, Paire and now Matosevic.

“I think I have played well. The score lines have been quite convincing against good players and tricky players who are big hitters of the ball,” Murray said.

“Paire is quite an unpredictable guy to play against and then Janowicz and Matosevic are big and strong guys, but I felt like I neutralised a lot of their power well and moved forward, and stepped up the court well when I had the chance. It was a good few matches.”

The final Saturday night will feature the USA team of Serena Williams and John Isner against Poland’s Radwanska and Janowicz.