The legendary Rod Laver has backed Lleyton Hewitt to fire at the 2015 Australian Open. 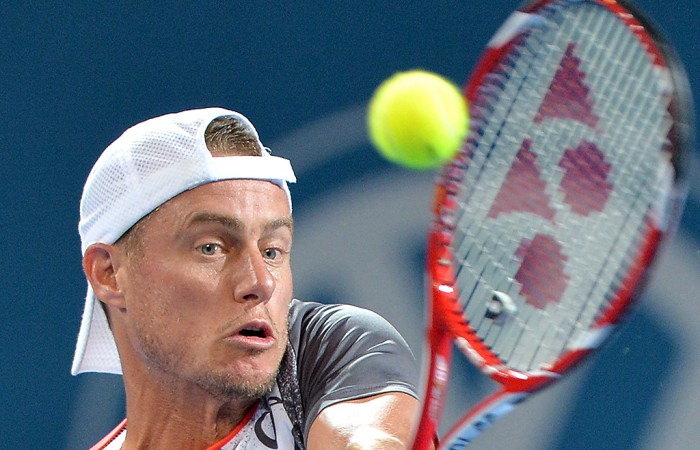 The legendary Rod Laver has backed Lleyton Hewitt to fire at the Australian Open despite wondering whether time might be catching up with the veteran.

And fellow tennis great Roy Emerson has cited Roger Federer as the player Australia’s young brigade should try to emulate as they strive to take the next step in 2015.

Eleven-time grand slam winner Laver wondered whether Hewitt was feeling his age after the 33-year-old crashed out in the Brisbane International’s first round.

In a troubling sign ahead of this month’s opening grand slam, world No.84 Hewitt’s Brisbane tournament defence lasted barely an hour as he succumbed to compatriot Sam Groth.

“I am not sure what his need is – to get out there and practice hard?” Laver, who won 38 of his record 200 career titles aged 30 or more, told AAP on Thursday.

“As you get into the 30s, it’s harder to get yourself up for matches – I know.

“But I think he will still have a good Australian Open.

“He’s not a young player any more but he’s a talent – he’s been brilliant since he was 16.”

More alarm bells were ringing ahead of the Australian Open when Hewitt refused to reshuffle his grand slam build-up after his Brisbane capitulation.

It ensures he will start his 19th Australian Open campaign with just one competitive singles match in 2015 under his belt.

But Emerson believed Hewitt wasn’t done yet despite only being provided a brief glimpse of him at Pat Rafter Arena.

“He’s been wonderful for us at Davis Cup – he’s such a competitor.

“He’s not finished yet.”

While he had plenty of respect for Hewitt, Emerson cited Federer as the example Australia’s young guns should aspire to be.

Emerson and Laver could not hide their excitement over the likes of Australian No.1 Nick Kyrgios, fellow teenage sensation Thanasi Kokkinakis and the revitalised Bernard Tomic.

“They have got the game to get there. It’s just a matter of if they want to put the work in and emulate Federer,” Emerson said.

“He has been at the top for so long for a reason – he’s so dedicated, he loves the game so much and he keeps himself in wonderful physical condition.

“Now these young guys have the opportunity and they shouldn’t let it go.”

Laver, winner of all four grand slams in a year – not once, but twice – joined his friend in Brisbane to celebrate the opening of the Roy Emerson Tennis Centre, site of the first Australian Open in 1969 and where the Hall of Famers trained together as teenagers.