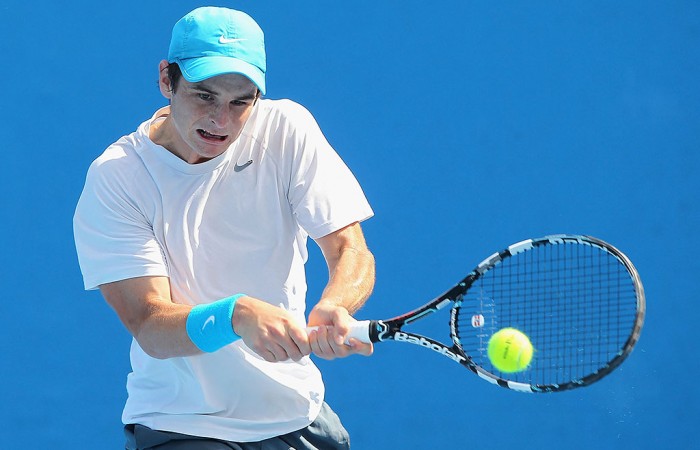 Three Victorians entered the final round of qualifying at the City of Onkaparinga Challenger 2015 on Monday with Jacob Grills, Andrew Harris and Andrew Whittington all successful in upsetting seeded players and progressing to the main draw.

Grills, currently ranked just inside the world’s top 700, faced fifth seed Aldin Setkic from Bosnia and Herzegovina. After taking the first set in a lengthy tiebreaker, the 19-year-old was forced into a decider when Setkic fought to secure the second set 6-4. From there, Grills never looked back, lifting his game against a fading Setkic to take the final set 6-0.

“I played well today,” Grills said. “I really lifted my intensity in the third. I didn’t miss many balls at all.

“In the end, I’m just pretty stoked to qualify.”

Grills arrived in Adelaide over a week ago and has been training at the venue in Happy Valley with South Australian pair Luke Saville and Alex Bolt.

“We’re great mates,” he said. “We’ve trained together a fair bit over the last couple of years.

“I did some running sessions and put in some hard yards with our trainer – hit a lot of balls,” he added.

“It’s been great for me to hit with these guys. That’s the kind of standard you get at these tournaments.”

In terms of his own expectations for 2015, Grills said he wanted to play more Challengers during the year.

“I will need to get my ranking up though,” he said.

Grills is also aiming to increase his physicality.

“I’m trying to improve my agility and speed around the court as well.”

In the other final qualifying rounds, 20-year-old Harris came back from a set down to topple third-seeded Frenchman Axel Michon in a deciding tiebreaker 4-6 6-1 7-6(5) while 21-year-old Whittingon was successful in his bid, defeating Brit Brydan Klein, seeded seven, 7-5 6-3.

In main draw action on Monday, it was the wildcards on show with home state favourite Bolt making short work of Argentinian Guido Andreozzi 6-3 6-2 and 17-year-old Omar Jasika forcing top seed Blaz Rola to thoroughly earn his victory after snatching the first set and giving himself plenty of opportunities in the second. The Slovakian rallied, however, eventually taking out the young Melbournian 4-6 6-4 6-1.