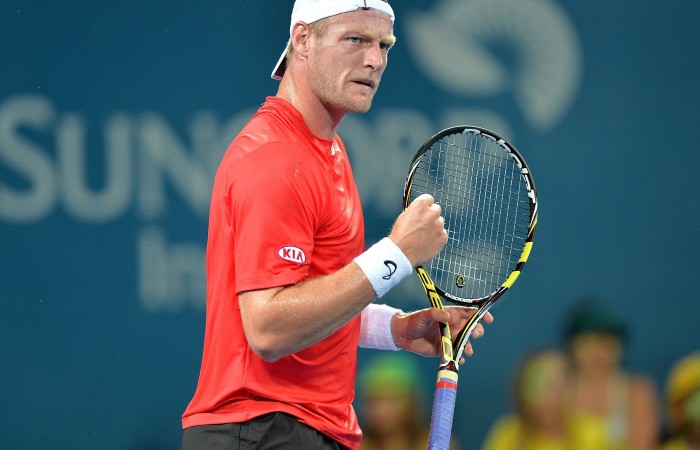 Sam Groth has declared his stunning straight sets victory over Lleyton Hewitt at the Brisbane International as the best match he’s ever played.

Groth needed less than an hour on Tuesday night to wreck Hewitt’s title defence, making light work of the former world number one with an easy 6-3 6-2 win at Pat Rafter Arena.

It could go down as a career-defining moment for the 27-year-old, who said he now feels at home on the big stage.

“Honestly, like from start to finish I didn’t really give him anything,” Groth said.

“I don’t think I could have done anything really any better than I did.

“It’s huge for my confidence obviously to beat Lleyton, but I had confidence going in before the match,” Groth said.

“After the year I had last year and after the work I’ve done in the offseason, I’ve said leading up to this tournament that I’m feeling as good as I ever have and I’ve worked hard and I feel like I belong here.”

Groth, the holder of the world record for the fastest serve ever recorded, dished up 14 aces compared to just one from Hewitt, who was bullied around the court in surprising fashion.

Three of those aces came in the very first game of the match as the late-bloomer from Narrandera in country NSW took firm control early in the piece.

Serving for the first set, Groth – who at No.85 in the world sits just one spot behind Hewitt in the ATP rankings – survived two break points to draw first blood.

He carried the momentum into the second, giving up just 15 points to Hewitt and requiring just one match point to wrap it up – although he did need a challenge to secure the victory.

Hewitt said there was little he could do to stop Groth’s potent service game.

“Mostly it was all about him. He served really well,” he said.

“There is not a whole heap I could have done (differently) apart from hold the few couple of service games early in each set.”

Groth will now face Poland’s Lukasz Kubot in the second round and will fancy his chances after announcing his arrival with this powerful performance.