Rising star Thanasi Kokkinakis will join the stellar field at next week’s Brisbane International 2015 after receiving a wildcard entry into the main draw. 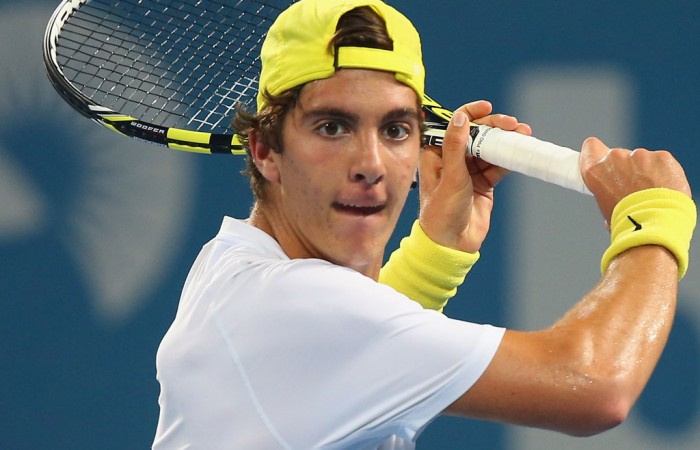 Rising star Thanasi Kokkinakis (SA) will join the stellar field at next week’s Brisbane International 2015 presented by Suncorp after receiving a wildcard entry into the main draw today.

Kokkinakis will line up alongside an all-star list – including five of the world’s top 11 men – set to battle it out for the 2015 title at Queensland Tennis Centre from Sunday 4 January.

The wildcard caps a stunning year for Kokkinakis, who has rocketed up the rankings from world No.627 one year ago today to now sit at No.150.

The 18-year-old ace, who made his Brisbane International debut as a qualifier at the 2014 event, will return to Queensland with fond memories of his showdown against fellow South Australian Lleyton Hewitt last December, and his sights set on pushing deep into the tournament in 2015.

“I’m very excited to play in Brisbane this year, I qualified for my first ATP tournament there last year and it was a great experience for me playing Lleyton on New Year’s Eve,” he said.

“I can’t wait to have more of those experiences and hopefully win a few rounds and go deep into the tournament. My goal is to win rounds in the draw, I’m not just there to make up the numbers and even though I’m a wildcard I feel like my game is developing like I want it to.

“Obviously it’s a very strong field but you get the draw you’re given and you’ve just got to give it a crack on the day. I think it’s probably the best ATP 250 event I’ve seen so far so I’m really looking forward to it.”

Just two weeks after his Brisbane International debut Kokkinakis posted his first ever Grand Slam singles win, defeating Igor Sijsling (NED) in four sets before bowing out to Rafael Nadal (ESP) in the second round of Australian Open 2014.

He went on to win his maiden professional tour title at the ITF Futures event in Canada in July, and was last month named Male Junior Athlete of the Year at the annual Newcombe Medal, Australian Tennis Awards in recognition of his outstanding year on the world circuit.

With less than one week to go until the tournament kicks off Brisbane International Tournament Director Cameron Pearson said Kokkinakis would be one to watch in 2015.

“We’re really excited for Thanasi to return to the event after such a big year, he’s had a terrific 12 months on tour and I know he’ll come to Brisbane looking to take it right up to some of the biggest names in tennis,” Pearson said.

“It’s fantastic for fans to be able to come along and support another Aussie in the draw, and also to see the future stars of the sport in action alongside some of the all-time greats in Lleyton Hewitt and Roger Federer.”

Two men’s wildcards remain up for grabs, with the recipients to be announced in the coming days.