Sydney youngster Jordan Thompson is relishing the chance to match or better his tennis heroics of last summer when he tackles the big names in the Kooyong Classic. 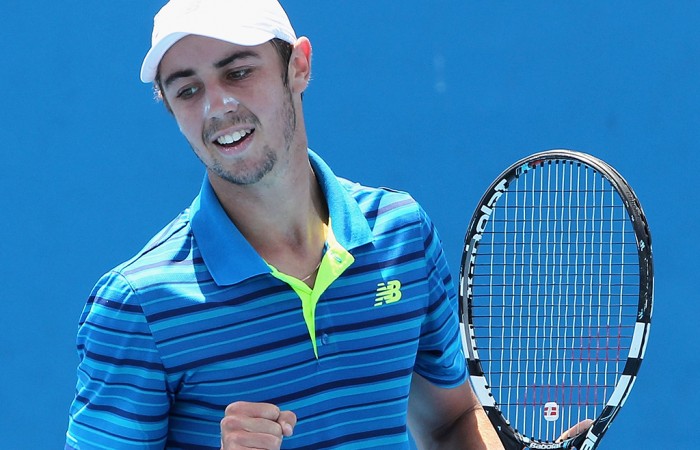 Sydney youngster Jordan Thompson is relishing the chance to match or better his tennis heroics of last summer when he tackles the big names in the Kooyong Classic.

Thompson announced himself on the world stage last January when he held match points against Richard Gasquet then beat Juan Monaco in straight sets in the Kooyong exhibition event before pushing world No.21 Jerzy Janowicz to five sets in the first round of the Australian Open.

With another season under his belt, the 20-year-old is preparing to follow the same path this summer after again winning the Australian Open 2015 Play-off to secure a berth in the main draw in January’s Grand Slam tournament.

In the lead up he will take his place in a Kooyong Classic field featuring defending champion and world No.5 Kei Nishikori, French stars Jo-Wilfried Tsonga, Richard Gasquet and Gilles Simon, Spanish lefties Fernando Verdasco and Feliciano Lopez and Ukraine’s Alexandr Dolgopolov from 13-16 January

“I think I definitely play my best tennis at home in Australia and I went really close to beating both Gasquet and Janowicz there last time around and had a good win over Monaco so this is a great chance for me to see where I’m at 12 months down the track,” Thompson said.

Thompson’s courageous five-set win over countryman John Patrick Smith in the wildcard playoff came despite cramping in the fierce heat during a battle that last more than four hours.

But it wasn’t new territory for him as he got through to the Open main draw the same way last time, winning a five-setter.

“Luckily I won’t have to worry about any five-setters at Kooyong, but I like playing in the heat so it will be great preparation for the Australian Open,” said Thompson, who reached a career-high ranking of No.219 in September.

Kooyong tournament director Brian Cooney was excited to see what Thompson could do this time around.

“Jordan is knocking on the door of another big result,” Cooney said. “He’s among the next generation of Australian hopes, and the Priceline Pharmacy Classic – Kooyong is the perfect place for him to make that breakthrough.

“All his potential opponents in the draw have been ranked in at least the top 15 and he is guaranteed three matches to try to pull off a big win.”