Annerly Poulos has captured the 2014 12/u Australian Championships girls' title on Sunday while the boys' event was won by fourth seed Xiao Fei Wang of China. 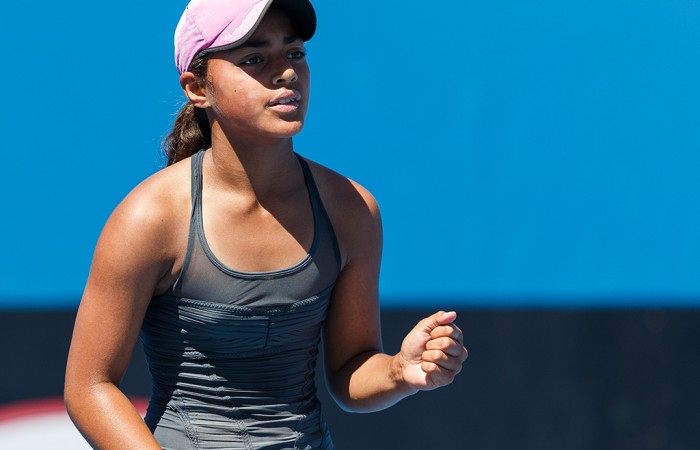 Third seed Annerly Poulos and fourth seed Xiao Fei Wang took home the 2014 12/u Australian Championships girls’ and boys’ titles on Sunday capping off what was an extremely competitive and high quality event.

Poulos dropped her first set of the tournament before prevailing 4-6 6-2 6-2 over 11th seed Natasha Russell while Xiao Fei Wang had a much easier time in his 6-1 6-0 upset win over second seed Philip Sekulic.

The Poulos and Russell matchup was one heavily dominated by the receiver, with the server unable to hold in four of the first five games.

Russell was 3-1 down early in the first before reeling off four games in a row to turn the momentum and take control of the early proceedings.

After dictating early, Poulos was suddenly on the back foot and in an attempt to get herself back into the contest, she employed a more adventurous and powerful groundstroke game.

It was a risky ploy and given Russell’s strong defence it was to no avail; Russell held to love to take the first set on the back of several Poulos unforced errors.

Russell’s control of the match continued early in the second set as she broke immediately to dash out to an early lead however that would be the last time she would have any control over the match.

Poulos won the last three games of the second set to send the match into a decider.

Suddenly Poulos was playing a more consistent brand of tennis and while Russell was able to hold sway at 2-2 in the third set, she wouldn’t make another mark on the scoreboard from that point on.

Poulos was ecstatic with the win and was quick to note how valuable the opportunity has been.

“It’s a good opportunity for me and my family. I’m just really proud, my peers are really proud and I’m really happy,” she said.

“I would like to thank my coach, Todd Larkham, my family and everyone for giving me the support.”

She said consistency was the key to her win.

“I kept really consistent and went for my shots a bit more in the second and third set and I just stayed composed and never gave up. I just kept fighting until the end,” she said.

In the boys’ final, Wang took just over an hour to defeat his more fancied opponent in what was a one-sided contest.

As soon as Wang broke in the second and fourth games of the first set, Sekulic was unable to recover.

Wang sensed the frustration of his opponent and accelerated his play as a result pushing a tiring Sekulic from side to side without making any unforced errors.

Sekulic fought valiantly at the beginning of the second, pushing a number of the rallies beyond ten shots in attempt to test Wang’s groundstroke durability.

However, Wang would not let up and while Sekulic had a break point at 5-0 down in the second set his lower-ranked opponent regained his composure and closed it out.

Speaking after the match, Wang was very grateful for the support he has received.

“I appreciate everyone for watching me, the Melbourne courts are really nice … I’d like to thank all the staff making this event happen,” he said.

“I hope to come back to Melbourne next year.”

Russell enjoyed some consolation on Sunday when she later combined with Alexandra San Andres to capture the girls’ 12/u doubles title; the pair beat Mia Repac and Angelina Subotic Dordevic 6-0 6-2.

Meanwhile, there was an upset in the one versus two boys’ doubles final, with No.2 seeds Alex Bulte and David Qariaqus defeating top-seeded duo Sekulic and Chen Dong 6-3 6-3.