The unseeded Jamie Fraser and Aleksa Cveticanin have scored upsets to reach the quarterfinals of the 2014 Australian 16/u Championships on what was a mixed day for the seeds at Melbourne Park. 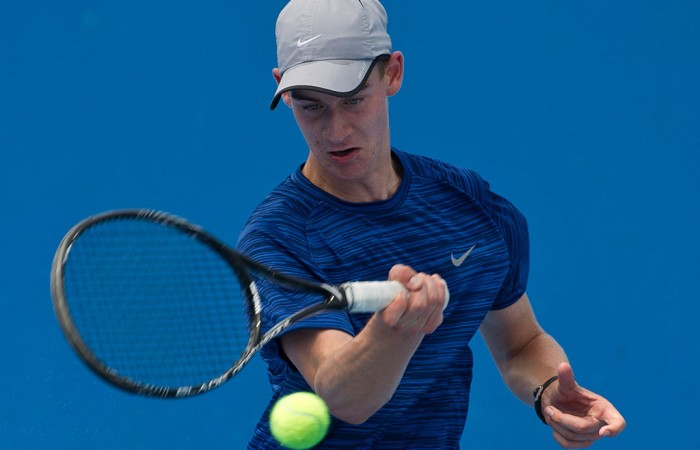 Unseeded New South Welshman Jamie Fraser powered past eighth seed Benard Nkomba, 6-1 6-3, to progress to the quarterfinals of the 2014 Australian 16/u Championships on what was a mixed day for the seeds at Melbourne Park.

It was Fraser’s fourth win on the trot at this year’s championships after he was forced to come through qualifying on Tuesday before going on to defeat Timothy Gray, 6-0 6-2, in his first round match a day later.

Nkomba was coming off a two-hour opening match and struggled to put any consistent groundstroke or serving pressure on his less fancied opponent.

Nkomba finally got on the scoreboard in the fourth game but that would be his only imprint on what was an error-riddled first set.

Things didn’t fare any better at the beginning of the second as Fraser broke immediately to continue his momentum. It wasn’t until late in the match where his run was disrupted as Nkomba mounted a small comeback.

Fraser was 5-1 up and sailing towards the quarterfinals, before Nkomba turned the tables to hold serve and then break to love, bringing scores back to 5-3.

However, he was too far back and the power of the Fraser game prevailed as he broke Nkomba to confirm the unexpected ending.

Fraser was surprised by the result given he had lost to Nkomba in their last matchup.

“I went into it feeling pretty nervous. I lost to him the previous time I played him so I didn’t know what to expect. I just went in with nothing to lose and came out on top.” he said.

“I talked to a few people who have beaten him, so I got a few game-plans and tried to execute them and it worked.”

On the girls’ side of the draw, second seed Nicole Kraemar came up against a powerful opponent in Queenslander Aleksa Cveticantin.

Cveticantin conceded the first set, 6-2, but made changes to her game-plan with the aim of catching Kraemar off guard.

“I changed the way I was playing, I moved up in the court more and started to take time away from her and rush her a little bit.” she said.

“I (was) taking her serves earlier and moving up on any short balls I got.”

As soon as Cveticantin changed her game-plan, Kraemar looked uncomfortable in the second set and seemed to lack the conviction she had displayed in the first.

After giving away the second set, Kraemar went up 4-2 in the third after a strong serving display and more double faults from Cveticantin.

However, Cveticantin would capitalise on her power advantage to win the last four games of the match.

Not all seeds were despaired as boys top seed Blake Ellis beat Matthew Romios 6-2 6-0 while the top seed on the girls side, Petra Hule, defeated Nina Paripovich 6-0 6-1.

Seeds progress in 12/u tournaments

In 12/u action, the boys’ Australian Championships have played out exactly according to plan, with all of the tournament’s top eight seeds advancing to the quarterfinals.

All except Liam Franklin advanced in straight sets – the sixth seed recovered from the loss of the opening set to defeat 10th seed Chen Dong of Queensland 6-7(3) 6-3 6-4.

In the girls’ event, six of the top nine seeds have progressed to the last eight.

However, the draw opened up somewhat following the withdrawal of No.1 seed Olivia Gadecki; this saw South Australia’s Maggie Pearce move through to the quarterfinals.