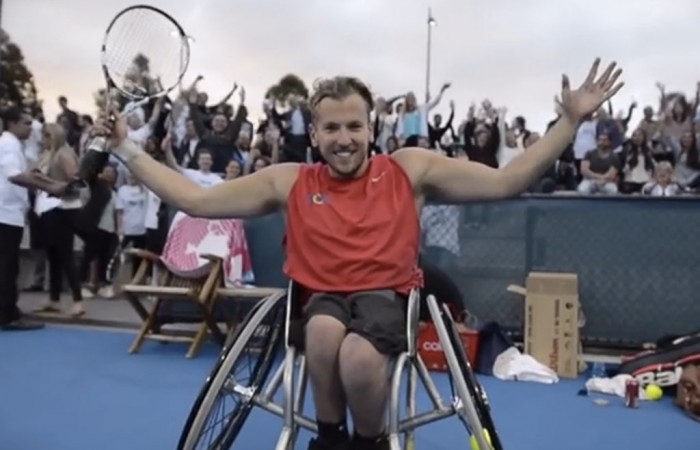 Alcott took on the 24-hour tennis challenge to raise much needed funds and awareness for two charities close to his heart, the Starlight Foundation and Variety – the Children’s Charity, both of which helped him overcome challenges as a child.

Through the Tennis Cares initiative Tennis Australia assisted Alcott to reach his goal by contributing the venue, staffing fees, catering, security and promotion for his marathon effort, as well as kick-starting the fundraising with a $10,000 donation.

The 24-year-old Victorian was joined by a host of celebrities including Australia’s top ranked player and Grand Slam champion Sam Stosur, Davis Cup player and world No.81 Sam Groth, basketball star Elizabeth Cambage and AFL players Jack Riewoldt and Tom Hawkins, along with a dedicated support team of family, friends and fans to complete the challenge.

His endurance was rewarded in the early hours of the morning with surprise appearances from Sex in the City actor Jason Lewis, who played barefoot for a couple of hours, Rob Mills, who arrived fresh from the opening night of Grease and took to the court decked out in black tie, and TV presenter Lauren Phillips.

“It’s been an amazing 24 hours,” Alcott said, sporting a swollen wrist and blisters and feeling exhilarated yet exhausted after completing his record-setting tennis marathon.

“I’d like to thank everyone involved, all those who came down and had a hit, and donated to the cause. I’m touched by all the support and hope I’ve managed to raise awareness both for the sport of wheelchair tennis and my charities, the Starlight Foundation and Variety – the Children’s Charity. The website will be open for donations for another week so there’s still time to get involved.

“Thanks also to my sponsors, AGL Energy, Acquire Learning and First National, and special thanks to Tennis Australia. Through Tennis Cares the whole team has helped out enormously, providing this amazing venue, staff and volunteers, a bit of a party last night and of course a generous $10,000 donation.”

Tennis Australia CEO Craig Tiley congratulated Alcott on his amazing achievement and said the Tennis Cares program would continue to make a difference in communities throughout Australia.

“Tennis is the ultimate community sport. Tennis Australia, through Tennis Cares and along with our clubs and partners, is committed to supporting initiatives and programs that will have a positive and lasting impact on families and communities,” Tiley said.

“Members of the tennis family run events and fundraisers all around Australia to raise awareness and money for issues important in their local areas and Dylan’s effort today is beyond exceptional.

“Through Tennis Cares we are delighted to support initiatives such as this one, and will continue to work with our Australian Tennis Foundation and commercial partners to make positive changes to the lives of people across the country.”

Tennis Cares is a positive force for change, where Australians from all walks of life can play, connect and achieve. Communities are at their best when people are healthy, connected to each other and have hope for their futures.

The Tennis Cares mission is to partner with business, organisations and government, including the Australian Tennis Foundation, to contribute to the success of vibrant communities.