Victorian Jeanette Lin and New Zealander Macsen Sisam capped off impressive weeks as they were crowned 14/u Australian Open champions at Melbourne Park. 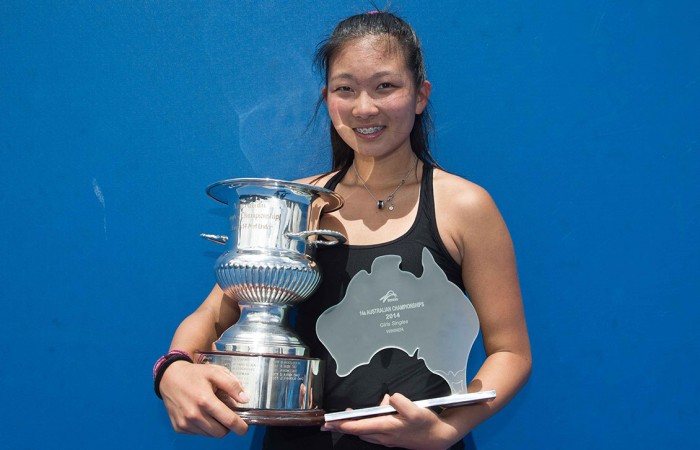 Victorian Jeanette Lin and New Zealander Macsen Sisam were today crowned 14/u Australian Champions, both recording impressive final wins to cap off a week of dominance.

Squaring off against third seed Alexander Crnokrak in a rematch of the 2012 12/u Australian Championships final, Macsen Sisam made the trip to Melbourne well worth his while, winning 6-2 6-2.

From the outset of the match the 16th seed Sisam was able to assert his control, successfully directing traffic away from Crnokrak’s dangerous forehand.

There were times throughout the match when Crnokrak appeared to be raising his level, with the two engaging in numerous grueling rallies highlighted by powerful ground strokes from each player.

However it was Sisam’s ability to maintain composure that enabled him to shrug off any challenges from the Queenslander. “I was more aggressive than him, and my forehand go a lot of winners as well as my serve,” he said.

> check out draws, results and matches from the 14/u Australian Championships

Soon after Sisam was crowned National Champion, No.1 seed Jeanette Lin prevailed 6-2 7-5 in an exciting contest against No.3 seed Violet Apisah.

Having lost to Apisah just two months ago in the final of an ITF junior tournament held in Gosford, NSW, Lin was understandably nervous but her failure to drop a set en route to the final made it hard to predict a winner.

Both players possessing impressive baseline games, the final was a hard-hitting affair with both girls fighting desperately to gain the upper hand.

In the end however, it was Lin’s willingness to step into the court and take the ball early that consistently put Apisah on the back foot and consequently allowed her to secure the win.

“Because I was so nervous, in the beginning I just wanted to play my game and just relax and get some balls in and then I slowly started to go more down the line and take more chances.”

Surrounded by all her friends that she has met at various tournaments, Lin has loved competing at the December Showdown but is looking forward to a short break over Christmas, after which she will travel to New Zealand to get straight back into competition.