In a Grand Slam first, more than 300 tennis fans will be given the chance to play on the People’s Court at Australian Open 2015 thanks to a new partnership between Tennis Australia and the Transport Accident Commission. 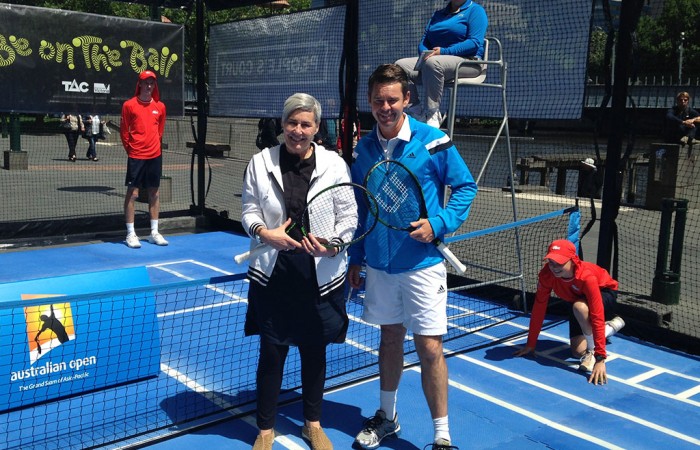 In a Grand Slam first more than 300 tennis fans will be given the chance to play on the People’s Court at Australian Open 2015 thanks to a new partnership between Tennis Australia and the Transport Accident Commission.

Court 9, generally a match or practice court during the event, will be transformed into the People’s Court, with competitors enjoying a total Australian Open playing experience complete with a chair umpire, ballkids, statistician and court services.

Just like every Australian Open competitor all registered players will receive an official player towel as well as a highlights video of their on-court performance to share on social media.

The TAC has joined forces with the Australian Open and will present the People’s Court as a positive way to promote the road safety message that distraction could lead to disaster.

Tennis Australia CEO Craig Tiley said that he was looking forward to being part of this great initiative which was launched today at Southbank.

“We are delighted to join forces with the TAC to give fans the opportunity to experience the excitement and atmosphere of playing on the same court as the world’s best players,” Tiley said.

“The People’s Court will reward tennis fans with the ultimate Australian Open experience and also raise awareness of the dangers of distractions for both drivers and pedestrians.”

Transport Accident Commission CEO Janet Dore said the People’s Court promotion and other TAC activities at the event were all about driving home the dangers of getting distracted on the roads, particularly for pedestrians.

“Any tennis player knows a courtside distraction at the wrong moment can put you off your game but when you’re out using the roads, a momentary distraction can be deadly,” Dore said.

“We’re proud to be partnering with Tennis Australia to use the power of the nation’s biggest sporting event to engage with the public on this important issue.”

Register for the chance to play on People’s Court before 30 December via the website www.peoplescourt.com.au. There will also be wildcard entries drawn each day of Australian Open 2015.

Fans searching for a distraction free-zone at Australian Open 2015 can head to the TAC Enchanted Garden at Grand Slam Oval. There they will be encouraged to disconnect from technology and relax within a tranquil oasis.