UPDATE: Top seeds Jeanette Lin and Stefan Norodom have begun their December Showdown campaigns in style by winning their opening round matches at the 14/u Australian Championships. 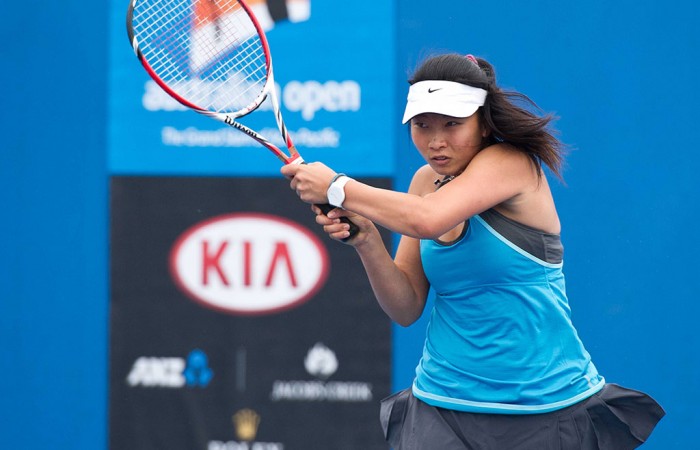 Despite heavy showers threatening play earlier in the morning, Saturday saw the commencement of the 14/u Australian Championships at Melbourne Park with the top seeds in both the girl’s and boy’s competitions registering opening round wins.

First up it was Victorian Jeanette Lim, who took on Zara Brankovic from New South Wales.

Lin came out firing, showcasing her proactive heavy hitting from the back on the court and before long, had taken a commanding lead. While Brankovic showed some flair at times, it was Lin who retained the upper hand throughout, taking the match 6-0 6-1.

“It was a good match for me,” Lin said. “I thought my opponent was really good and I hope she does well in her future matches.

“It was great to get through it before the rain came back. It feels good.”

Lin felt her powerful groundstrokes stood her in good stead in the heavier conditions today.

“I stand on the baseline and attack. That’s my strength,” she said.

Having just come back from a National Academy camp in Sorrento, Lin feels her fitness is at a good level.

“It was also about team bonding, which was really fun,” she said.

In other results, all but one of the 14/u girls seeds advanced on Saturday, including No.2 seed Daniela Kovacevic, who posted a tight 7-6(2) 6-3 victory over Madelaine Muller-Hughes.

With wind picking up in the afternoon, boy’s top seed Stefan Norodom faced a determined Ryoma Matsushita from Japan.

The South Australian needed to bring his best game with Matsushita providing some stiff opposition, but in the end he prevailed in an entertaining affair 6-3 7-5.

“I tried to adapt to the wind today,” Norodom said. “It took time but in the end I thought I did that pretty well.

“I’ve been training well and I’m feeling pretty confident coming into this tournament,” he added.

It was similarly smooth progression for the boys seeds, with all except two advancing to the second round; joining Norodom in the last 32 were fellow top four seeds Sean Van Rensburg (2), Alexander Crnokrak (3) and Greg Polmans (4), who each won in straight sets.

Also commencing at Melbourne Park was the first round of qualifying in the 18/u Australian Championships.

Advancing to the final round of qualifying after winning two matches on Saturday were top seeds Cody Brackenreg and Alicia Smith, and girls’ second seed Anja Dokic.