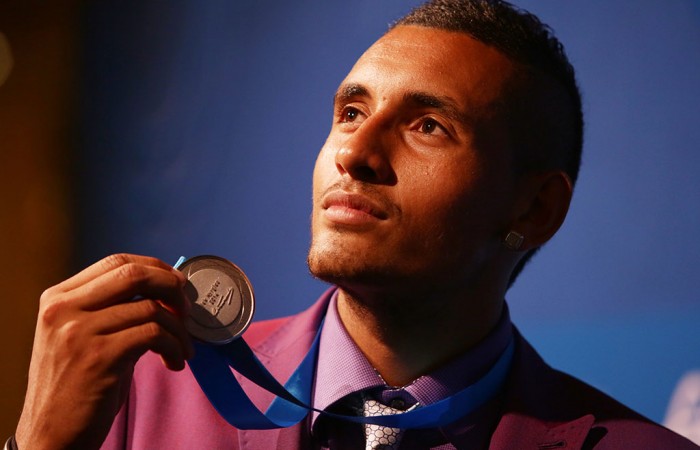 In receiving the award the Canberra tennis ace was formally recognised as Australia’s most outstanding tennis player in 2014. He was presented the award by Australian tennis legend John Newcombe, in whose honour the award is named.

Kyrgios was humbled by the achievement, for which he was nominated alongside Lleyton Hewitt, Sam Stosur and Casey Dellacqua.

“I wasn’t expecting to win this award, I didn’t think my name was going to be called, I thought Casey was going to win it to be honest, but they (all the nominees) all had such great years so it’s just an honour to be up here,” he said.

Kyrgios has enjoyed a breakthrough year on the world tennis circuit.

In July he ousted then-world No.1 Rafael Nadal (ESP) from the fourth round at Wimbledon to advance to the quarterfinals of a major for the first time, drawing widespread acclaim from some of the sport’s biggest names including Aussie legends Rod Laver and John McEnroe, and current world No.6 Andy Murray (GBR).

Earlier in the tournament he had recovered from two-sets-to-love down and saved nine match points to beat 13th seed Richard Gasquet.

“That was the match (versus Gasquet) I remember from Wimbledon, it wasn’t against Rafa, but I should have been out in the second round, but I just dug in there,” he said.

“I remember coming into the locker rooms and I remember Lleyton coming in and giving me a well done and a hug and I’m never going to forget that … I did everything I possibly could and got the job done.”

The 19-year-old backed up his Wimbledon campaign with a third round appearance at the US Open, showing he has what it takes to make it on the Grand Slam stage.

Starting the year at world No.183, Kyrgios collected ATP Challenger titles in Nottingham, Savannah and Sarasota en route to a career-high ranking of No.51 in September.

That same month he joined the Australian Davis Cup team in its 5-0 win over Uzbekistan, helping the side to retain its place in the elite World Group.

After such an impressive season, Newcombe asked Kyrgios what his goals were going forward.

“I haven’t put a number on it yet, but I’d love to overtake Lleyton,” he said with a smile.

“It doesn’t seem right if he’s not the number one Australian, he’s the leader of the Davis Cup team no doubt.”

Kyrgios paid special tribute to current coach Todd Larkham, former coach Simon Rea and strength and conditioning coach Aaron Kellett for the gains he had made in his career.

Kyrgios joins three-time winner Stosur and 2014 recipient Hewitt on the Newcombe Medal honour roll. The award has been presented annually since 2011.

The Newcombe Medal is the premier award presented on a night that recognises players, coaches, clubs, communities, volunteers and officials for their service to the sport.

A highlight of the evening’s celebrations was the presentation of the President’s Spirit of Tennis Award to Carol Langsford (NSW) for her outstanding contribution to the sport. Langsford has been involved with Tennis New South Wales in a range of roles over many decades.