A tireless contributor to tennis in both New South Wales and Australia, Carol Langsford has been honoured for her work with the President's Spirit of Tennis Award. 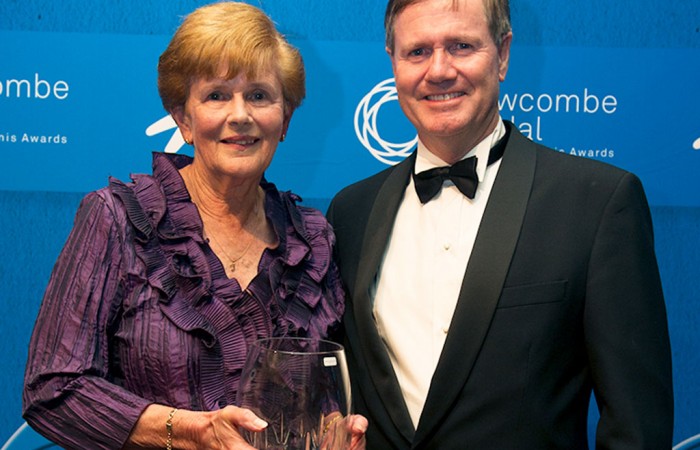 A highlight of the Newcombe Medal Australian Tennis Awards gala ceremony on Monday night was the presentation of the President’s Spirit of Tennis Award to Carol Langsford.

Langsford, who has been involved with Tennis New South Wales in a range of roles over many decades, was honoured for her outstanding contribution to the game.

She humbly accepted the award, and said: “I’m blown away. I love our sport, there are so many people contributing. I’m just so very grateful.”

Having twice contested the Australian Open women’s singles events in 1966 and 1970, the latter at which she reached the second round – she also worked as a professional tennis coach.

Langsford served the sport in several administrative roles; she held a position on Tennis Australia’s Player Development Board and as a National Selector for more than 10 years, and was a Tennis NSW board member for 12 years.

She served on a plethora of committees during her time at Tennis NSW, including the women’s advisory committee and those overseeing player development, tournament sanctioning, strategic planning, women’s selection, executive, coaches examination, social, membership, competition and events, referee appointments, player development and community tennis, and marketing and sponsorship. She also chaired the state’s participation committee.

With a passion for junior player development, Langsford, along with Brian Armstrong, has been the lead organiser of the NSW State Teams Championships for the 10s, 12s and 14s age groups. This year marked her 20th year of involvement with these events.

Langsford’s influence was also felt in wider sporting circles; she was a Tennis NSW delegate the NSW Olympic Council and a member of the state’s Ministerial Women in Sport Advisory Council.

Her contribution to the community extends beyond the tennis court.

Along with husband Roy, Langsford established the Trish MS Research Foundation in 2000 in honour of their daughter Trish, who was diagnosed with MS in 1994 aged 23.

Trish, an elite sportswoman representing NSW and Australia in cricket, had an aggressive and rapidly progressing form of MS and passed away at age 30.

In pursuing its mission to find a cure and preventative strategies for MS, the Trish MS Research Foundation has established close links with MS Research Australia, and to date has raised more than $3 million to become one of the most important private contributors to MS research in Australia.

Find out more about Carol Langford’s work with the Trish MS Research Foundation.