Two Swedes and two Japanese round out the semifinal line-up at the Bendigo Tennis International. 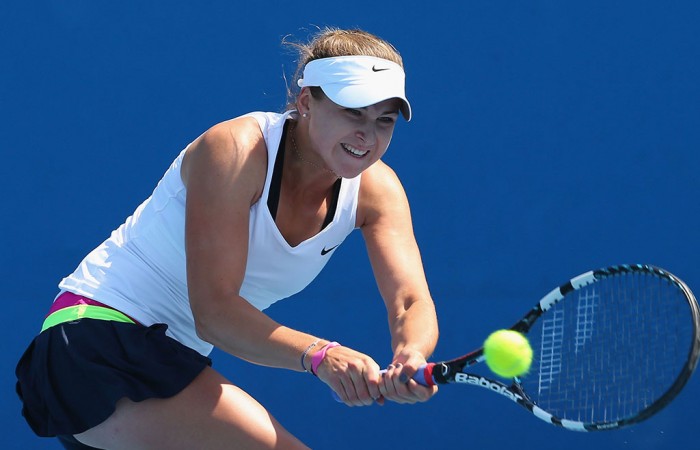 Top seed Eri Hozumi and third seed Risa Ozaki each progressed to the semifinal stage of the 2014 Bendigo Tennis International on Friday with comfortable wins.

Rounding out the draw, the Swedish contingent continued their domination with Rebecca Peterson and Susanne Celik booking their places alongside the Japanese.

Celik was relatively untroubled in overcoming Zhaoxuan Yang 6-0 7-5 in her quarterfinal, while second seeded Peterson was stretched a little by Aussie Daria Garilova, eventually prevailing 6-3 4-6 6-3.

The Japanese girls both came through in straight sets with Ozaki taking out Thailand’s Varatchaya Wongteanchai 6-4 6-2, and Hozumi enduring a tight first set against compatriot Miyabi Inoue before pulling away 7-6(6) 6-2.

Hozumi said she was pleased to reach the semifinal and was looking forward to the showdown against the Swedes.

With that sentiment in mind, it is worth noting that a Swede has appeared in each of the Australian Pro Tour finals to date, winning two titles (Ellen Allgurin won Toowomba and Peterson was successful in Perth) while the Japanese have reached at least the semifinals in all but one event and have a title to their credit in Cairns (Ayaka Okuno).

On a purely head-to-head basis, the Swedes hold a commanding 5-1 lead across all events thus far, with Japan’s only victory coming in the Cairns final, where Okuno defeated Allgurin in straight sets.

First up on Saturday in Bendigo, 20-year-old Hozumi will take on the teenaged Celik. The two have never met previously but with a WTA ranking over 100 places higher than her unseeded opponent, the top seed looks well placed to book Japan an early berth in the final.

Following them on Court 1, the second semifinal looks on paper like a much more even affair. Once again, the match pits a 20-year-old Japanese player against a 19-year-old Swede and again, neither has played each other before at this level. However, with their rankings similar – sitting either side of 200 – and both having enjoyed a run of extremely consistent tennis in the last month, the second and third seeds look set to produce the match of the tournament so far.

Whatever the outcome, spectators at the Bendigo Bank Tennis Complex are assured to witness some quality tennis, with the players looking to not only achieve some more individual success, but now there is some added – albeit friendly – national pride on the line as well.

The first semifinal begins at 10am on Saturday.