Sam Stosur has defended her title in Osaka to win her third Japan Women's Open with a straight-sets final victory over Kazakhstan's Zarina Diyas. 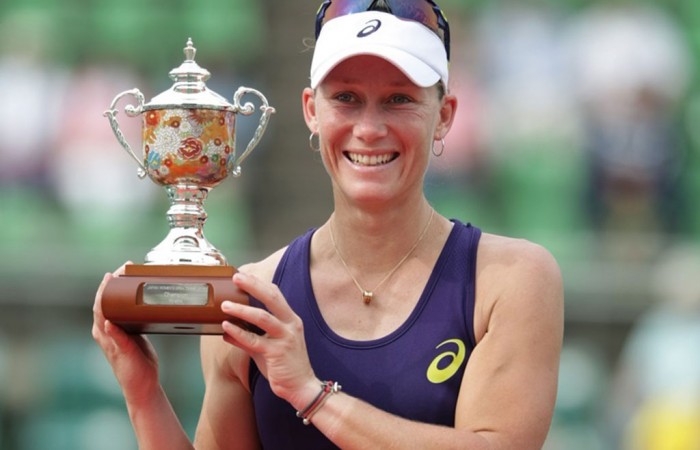 Sam Stosur has now won six WTA titles in her career and half of them have come at the Japan Women’s Open in Osaka.

The top-seeded Australian clinched the Japan title for a third time when she overcame stern resistance to beat Kazakhstan’s Zarina Diyas 7-6(7) 6-3 in Sunday’s final.

The Australian went through the tournament without dropping a set as she added the 2014 title to those she won in 2009 and 2013.

The field was not the strongest; Stosur was top seed with a world ranking of No.18 and fifth-seeded Diyas is the world No.37.

But 2011 US Open champion Stosur has made a habit of firing late in the season and she was delighted to collect her first title since her victory in the same event a year ago.

It follows some strong form in Beijing last week when she made the semifinals before losing to Petra Kvitova in three sets.

Diyas had never contested a WTA semifinal before this week but she pressed Stosur hard, breaking her serve in the first game of the match and leading 5-3 before the Australian forced a tie-breaker then saw off two set points.

“Zarina played a very good match today,” said Stosur. “She managed to put me under a lot of pressure and returned serve really well. She gets to a lot of balls and can put you under pressure.

“Trying to serve out a set in a final, I don’t know if maybe she was a little nervous but I tried to play a little bit more aggressive or put a bit more on my shots to make her come up with something else.”

Stosur then broke serve in the first game of the second set and pulled away from her opponent who is one of the four players who will contest the WTA Rising Stars Invitational.

Diyas chose to focus on the positives after a breakthrough week.

“It was my first final so I am happy with how I played,” she said. “She served very well and it was tough, especially on those set points. But this was a great experience for me.”