At Australian Open 2014 the world’s top tennis players were thrilled to learn they had been assigned an Aussie town to cheer them along their Grand Slam campaign at Melbourne Park. 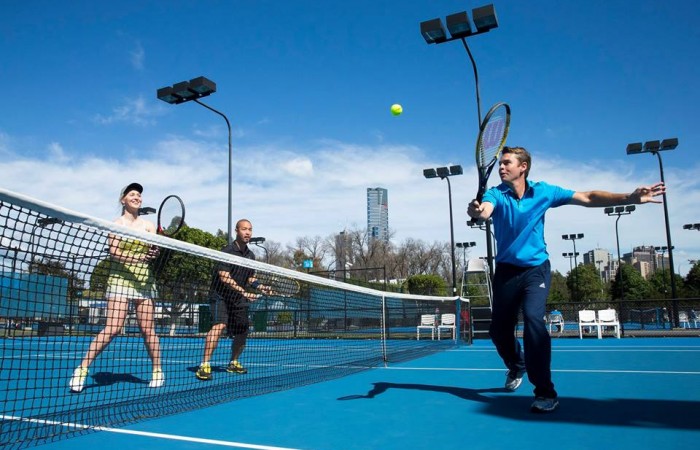 At Australian Open 2014 the world’s top tennis players were thrilled to learn they had been assigned an Aussie town to cheer them along their Grand Slam campaign at Melbourne Park.

Where else would you find Novak Djokovic aligned with the outback town of Parkes (NSW), Andy Murray comparing the heat of Melbourne to his partner town of Alice Springs (NT) or Maria Sharapova being tweeted by the mayor of Warrnambool (Vic)?

> About the AO Tennis Blitz

Designed to encourage more Australians to pick up a racquet and have a hit, the AO Tennis Blitz engages schools, clubs and individuals in tennis via a series of events, community showcases and the first ever ‘Win a Wildcard’ competition.

A series of Win a Wildcard mixed doubles tournaments will take place around Australia this month, with local winners of A, B and C grades travelling to Melbourne Park in December to play off in the finals.

The ultimate winning pair will take home the prize of a lifetime – a wildcard into the Australian Open 2015 mixed doubles, including the chance to rub shoulders with all the stars of the sport in the locker rooms, access to the official Kia courtesy cars and player restaurant, and exclusive player perks.

> Hit the target and win

B and C grade semifinalists will be rewarded with the chance to play their finals matches at Melbourne Park in the second week of the Australian Open.

Local hopefuls will lace up their tennis shoes this weekend when the Win a Wildcard competition hits Melbourne Park. Mixed doubles pairs will battle it out for their chance at Grand Slam glory on court this Sunday 12 October from 10:30am.

> Free tennis near you

All AO Tennis Blitz participants will earn points for their local community, with the top 256 points-scoring towns to be assigned their very own Australian Open player to support in January.