Australia's bad luck in the Davis Cup draw continues after being handed a daunting opening 2015 World Group assignment away to Czech Republic. 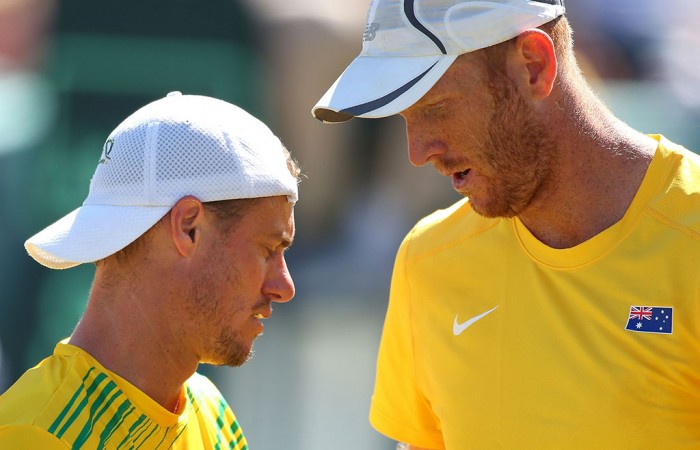 Australia’s bad luck in the Davis Cup draw continues after being handed a daunting opening 2015 World Group assignment away to Czech Republic.

The tie in early March sees Pat Rafter’s side having to face a genuine Davis Cup heavyweight in Europe for the second successive year.

Australia ended a seven-year period away from the top tier in 2014, only to fall 5-0 in France in round one.

And after thrashing Uzbekistan 5-0 earlier this month to earn another crack at the top level, Rafter’s men will again be heavy underdogs in their quest to progress past round one of the World Group for the first time since 2006.

The third-seeded Czechs, spearheaded by world No.7 Tomas Berdych, won back-to-back titles in 2012 and 2013 but lost to France in this year’s semis.

Australia, 28-time champions, certainly aren’t without hope of an upset, particularly if young guns Nick Kyrgios and Bernard Tomic are firing, while Hewitt will be desperate for another shot at winning the prestigious teams event for the third time.

The nation’s most prolific Davis Cup singles winner turns 34 in February and is entering his 17th year in the competition but another first-round exit could perhaps bring down the curtain on his distinguished Cup career.

Australia’s bad luck in Thursday’s draw, held in Dubai, came despite the odds of avoiding an away clash being in their favour.

Five of eight possible match-ups would have guaranteed them hosting rights, though Australia can at least be thankful for avoiding an away clash against Roger Federer’s second-seeded Switzerland.

The clash with the Czechs, Australia’s fourth straight World Group first round match-up away to European opposition, will be played at a yet-to-be-determined Czech venue on 6-8 March.

The winner will face either Italy or Kazakhstan in the quarterfinals.

Thursday’s draw also produced some mouthwatering match-ups between France and Germany, Argentina and Brazil, and Great Britain and the USA.