Sam Groth's successful debut for Australia in the nation’s Davis Cup tie against Uzbekistan represented the fulfilment of a childhood dream. 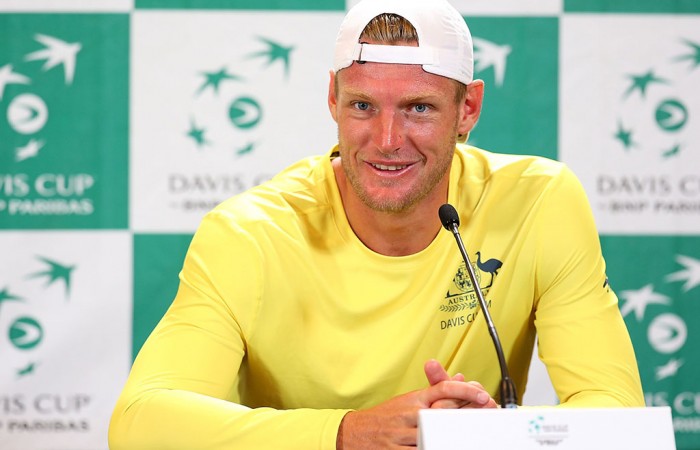 Debuting for Australia in the nation’s Davis Cup tie against Uzbekistan represented the fulfilment of a childhood dream for Sam Groth.

The 26-year-old Victorian took to the court on Sunday for a dead singles rubber against Temur Ismailov, breezing to a 6-3 6-2 win in a mere 63 minutes.

The result helped cap an impressive 5-0 victory for the hosts, ensuring that they will remain in the competition’s elite 16-nation World Group for 2015.

“Just being a part of the team has been amazing obviously, but to get the chance to pull on the green and gold and get out on court is a dream come true and something I’ve wanted ever since I was a kid,” Groth revealed.

“I was a bit shaky at the start; I think in my first service game I could hardly get the ball out of my hand so it’s nice to get one under the belt, and hopefully if I get my chance again I’ll be better for it.”

His selection and participation in the tie marked the latest step in what has been a career renaissance for the big-serving right-hander.

Just three years ago Groth stepped away from the game, played a season of Australian Rules football and saw his ranking blow out to No.789 in December 2011.

But rediscovering his passion for the game, he has returned fitter, stronger, smarter and more dedicated, and is reaping the rewards.

Impressively, he cracked the world’s top 100 earlier this season after reaching the semifinals in Newport and quarters at the Brisbane International, qualifying at Wimbledon and winning his biggest professional title at the ATP Challenger event in Rimouski, Canada.

His 2014 doubles results have been equally noteworthy, highlighted by six titles with compatriot Chris Guccione and a run to the semifinals at Roland Garros with Andrey Golubev.

“I don’t think a lot of people thought I’d get to where I am at the moment. I want to keep trying to play singles and doubles and give myself that option for the team,” he said.

“That was my goal over the last 18 months was to make myself available to be that player who can play both. I feel if I can keep improving my singles and double I can give myself a shot of playing again.”

The Davis Cup experience will no doubt prove invaluable for Groth as he continues to solidify his presence on the ATP Tour.

Having battled for years on the Challenger circuit, he is turning his attention primarily to tour events now that his ranking allows it; his goal is to finish the season inside the world’s top 100 – thus guaranteeing direct entry into the Australian Open – and end the year as Australia’s top doubles player.

Having managed the unique pressures of the Davis Cup environment as well as receiving “priceless” counsel from team captain Pat Rafter will assist him in that quest.

“Pat probably spoke to me a lot more than the other guys … he’s a guy that played a very similar game style to me, so (there was) the chance to talk about a few things, (him) asking me things that I saw, and things that he saw, and (how) I probably should have hit this shot at this time,” Groth explained.

“That’s something I’ve tried to learn off him in the last 10 days. And having that in a real live situation as well is priceless for me.”

The immediate goal for Groth, however, was to soak in the spoils of victory with his teammates.

“Everyone puts so much effort into the lead-up for a Davis Cup tie and there’s so much pressure and everyone’s working their guts out and it’s a bit different being in that team environment,” he said.

“I think when you’re finished and get the win it’s also great to relax with the guys as well – I think we’ll have a couple of quiet ones.”