Australia's Davis Cup captain Pat Rafter hopes his team will receive a slice of overdue luck when the draw for the first round of the 2015 World Group is announced on Thursday. 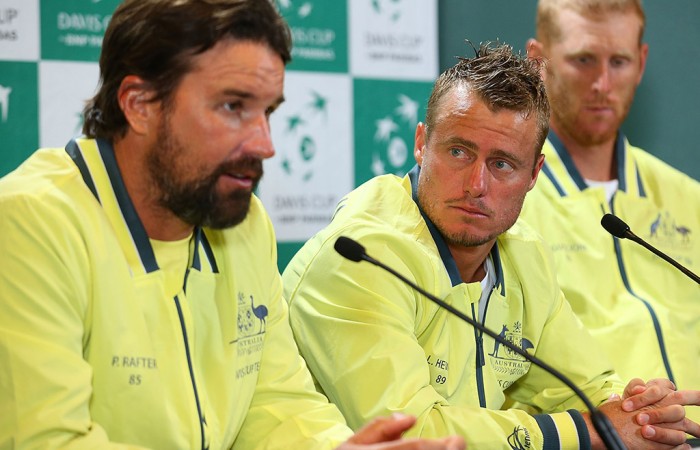 Australia’s Davis Cup captain Pat Rafter hopes his team will receive a slice of overdue luck when the draw for the first round of the 2015 World Group is announced on Thursday.

Australia retained their spot in the elite 16-nation World Group after beating Uzbekistan 5-0 in the play-off in Perth.

Rafter is confident his team can cause some damage in the first round next year – as long as they receive a good draw.

Australia copped a 5-0 pasting at the hands of France on enemy territory earlier this year, and Rafter is hoping for a friendlier draw this time around.

A trip to Switzerland to face the might of former world No.1 Roger Federer and 2014 Australian Open champion Stanislas Wawrinka would be a nightmare scenario.

But Australia will fancy their chances if they are drawn against either Italy (home), Germany (home) or Kazakhstan (venue to be decided by coin toss).

“There’s a couple of ties we don’t want,” Rafter said.

“But I think there’s some (ties) that won’t just be winnable, but we’ll be favourites.

“We’ve got some good opportunities.”

With Australia already 4-0 up in the tie, the pressure was off Kyrgios heading into Sunday’s match against world No.736 Sanjar Fayziev.

Despite the perfect sunshine, Kyrgios was in no mood to hang about, with the 19-year-old taking just 39 minutes to dispatch Fayziev 6-1 6-1.

However, it wasn’t all smooth sailing for Kyrgios, who lost a game in the second set after being troubled by a blood nose.

“I’ve always had a tendency to get blood noses,” Kyrgios said.

“Usually if it doesn’t stop I’d get a cotton ball or something to put up my nose.

“You can get forfeited if it doesn’t stop, so it’s actually a bit of a serious issue if I’m getting blood noses all of the time.

“It came at a pretty weird time, but what are you going to do?

“I couldn’t really put my head down because it would leak.”

Earlier in the day, big-serving Victorian Sam Groth made a perfect start to his Davis Cup career with a 6-3 6-2 win over world No.527 Temur Ismailov.

Groth, who became the 105th player to represent Australia at the Davis Cup, needed just 63 minutes to power past Ismailov.

Uzbekistan, who are yet to reach the World Group, will have to battle it out in the Asia/Oceania Zone for another year after struggling badly on the grass surface at Cottesloe Tennis Club.

Lleyton Hewitt and Kyrgios stormed to straight-sets singles wins on the opening day over Farrukh Dustov and Denis Istomin respectively.

Hewitt and Chris Guccione then combined for a 6-3 7-6 (7-5) 6-2 doubles victory over Istomin and Dustov on Saturday to give Australia an unassailable 3-0 lead.