UPDATE 6pm: Australia has retained its place in the Davis Cup World Group after a commanding 3-0 Play-off tie victory over Uzbekistan at Cottesloe Tennis Club. 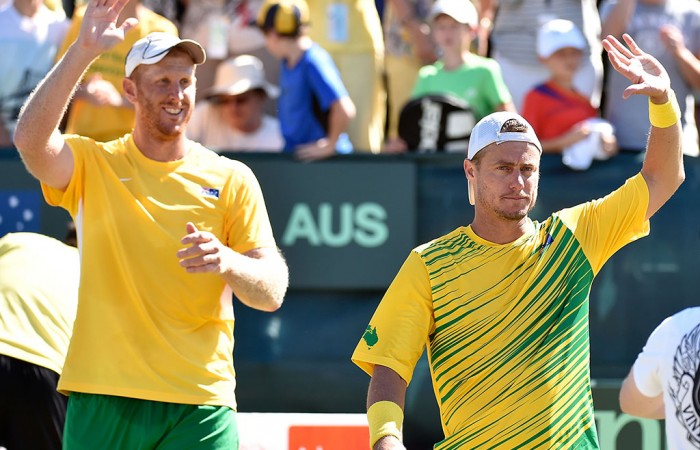 Australia will fight it out against the Davis Cup elite in 2015 after taking an unassailable 3-0 lead in the World Group play-off against Uzbekistan in Perth on Saturday.

Neither Hewitt nor Guccione dropped their serve on their way to their sixth win as a Davis Cup doubles pairing.

“We are complete opposite game styles, personalities, everything, in a lot of ways, but we team up really well though and we know what we’re going to get from one another on the court,” Hewitt said.

“We don’t play a lot of doubles together, but I feel in these one-off matches we gel pretty well.”

The Australians broke Istomin’s serve in just the second game of the match and were never troubled as they closed out the opening set in just 29 minutes.

Both teams traded blows in the second set, highlighted by three perfect services games from Guccione, before Australia prevailed in the tiebreak.

Guccione conceded just one point from his booming serve in the first set and was on track to better the feat in the second until he dropped two points in the tiebreak.

Australia could sniff victory when Dustov was broken in the sixth game of the third set before sealing the tie and a place in next year’s World Group just two games later.

Hewitt and rising star Nick Kyrgios recorded comfortable singles victories over Istomin and Dustov on Friday to give Australia the perfect start to the tie.

Both players are likely to be rested from Sunday’s reverse singles, with Sam Groth in line to make his Davis Cup debut.

Australia will find out on Thursday who they will play in next year’s opening round of the World Group.

Uzbekistan, who are yet to qualify for the World Group in six attempts, will return to the Asia/Oceania zone group in 2015.