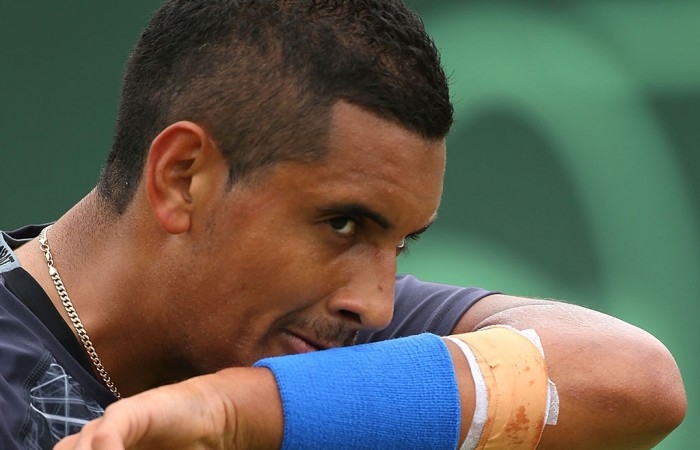 Kyrgios has been drawn to face world No.55 Denis Istomin in the first rubber, with Lleyton Hewitt to take on world No.133 Farrukh Dustov later in the day.

Hewitt will then join forces with Chris Guccione in the doubles on Saturday to take on Istomin and Dustov.

> check out the full draw

The winner of the tie will guarantee themselves a spot in the elite 16-nation World Group for next year.

The loser will face a year in the Asia/Oceania Zone Group, where they will have to battle for the chance to play in another World Group play-off.

Kyrgios is just 19-years-old, but he’s already had some big-match experience.

At Wimbledon this year, Kyrgios beat then World No.1 Rafael Nadal on the way to the quarterfinals, before making it to the third round at the US Open.

Kyrgios said the pressure surrounding the Davis Cup was a different kettle of fish to the Grand Slams.

“You are playing for your country, and you are also playing for the guys around you. You’re just trying to do everything possible to get the win, so I think there’s more pressure.

“But it’s exciting to have the opportunity to get us back into the World Group and play a quality player like Denis.

“It’s going to be a fun match and I’m looking forward to it.”

Australia enter the play-off as warm favourites, especially on their preferred grass surface.

But team captain Pat Rafter said his team’s superior ranking would mean nothing once the matches start.

“On paper we win, but it doesn’t make any difference when you get out there on court,” Rafter said.

“Istomin is a very good player, and Dustov plays better than his ranking when he plays Davis Cup, so we have to be prepared for that.”

Istomin said his side were desperate for revenge, and he said he would have no issues playing three days in a row if that’s what’s required to win.

Uzbekistan have never made it through to the World Group stage, and Istomin said a win over Australia would give tennis in his country a massive boost.