They're 9692km away from home and not playing on their preferred clay surface, but Uzbekistan has a stern message for Australia's Davis Cup team - it hasn't come here to lose. 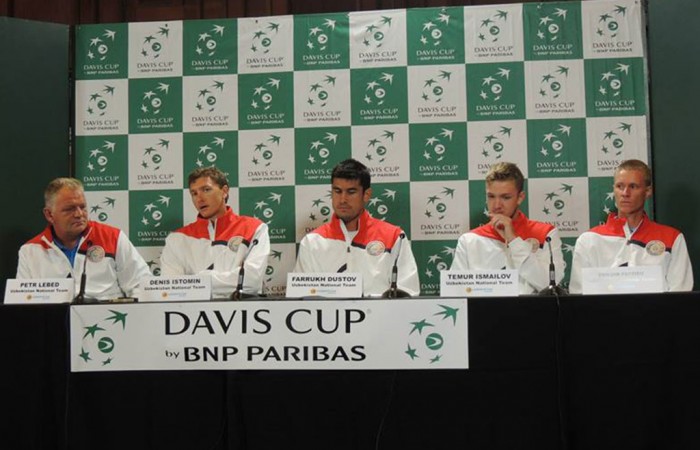 They’re 9692km away from home and not playing on their preferred clay surface, but Uzbekistan has a stern message for Australia’s Davis Cup team – it hasn’t come here to lose.

Uzbekistan and Australia will lock horns in Perth this week for a play-off that will decide which country goes through to the elite World Group next year.

Australia will be spearheaded by veteran Lleyton Hewitt and rising star Nick Kyrgios, while Uzbekistan features world No.55 Denis Istomin and world No.133 Farrukh Dustov.

On paper, Australia should prevail, especially given its home court advantage and its ability to nominate grass as the surface for the tie.

But Istomin says Uzbekistan has other ideas as the country attempts to reach the World Group stage for the first time.

“I think the favourites are Australia, but we are not coming to lose,” Istomin said ahead of the first singles battle, starting on Friday.

“We are coming to win. For us it doesn’t matter where we play – we play to win.

“I feel comfortable on grass – my favourite surface.

“For us it would be a big step if we go through to the World Group.”

Kyrgios didn’t play in that tie, but it hasn’t been hard to keep a close eye on the 19-year-old, who reached the Wimbledon quarterfinals earlier this year.

“He’s in good shape now and he’s so confident. He won’t be easy to play against, but we will try. I think he has a big future,” Istomin said.

Hewitt and Istomin are locked at 2-2 in their head-to-head ATP battles, with Istomin winning both encounters last year.

Chris Guccione is set to play in the doubles for Australia, with Sam Groth a chance to join him in what would be his Davis Cup debut.

Australia’s Davis Cup captain Pat Rafter is confident the grass surface will give his side a significant advantage.

“We wouldn’t have put it on grass if we didn’t think it would give us an edge,” Rafter said.

“They didn’t put us on grass when we went over there, they made it pretty clear they wanted to put us on clay.

“I’m very confident of our chances.”