Nick Kyrgios is determined not to let a niggling arm injury slow him down as he attempts to help Australia retain its spot in the Davis Cup World Group. 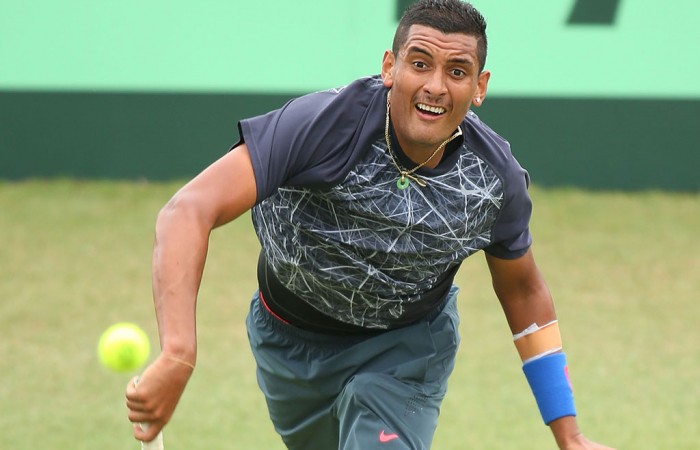 A niggling arm injury has been a tad annoying, but Nick Kyrgios is determined not to let it become a downer as he attempts to help Australia retain their spot in the Davis Cup World Group.

Kyrgios has been battling pain in his left arm since before the US Open, but the 19-year-old says he’ll be ready to go for Australia’s World Group play-off against Uzbekistan in Perth, starting Friday.

The world No.53 has been joined in the squad by veteran Lleyton Hewitt, doubles specialist Chris Guccione, and big-serving Victorian Sam Groth.

Australia are favoured to win the tie, and Kyrgios is confident his arm complaint won’t affect him too much.

“You’re never going to feel 100 per cent,” the right-hander said on Tuesday.

“I’m still learning every day to deal with niggling injuries. I’m healthy enough to compete. It’s just a bit of soreness in my left arm.

“Playing Davis Cup is one of the funnest things and one of my favourite things to do during the year. Every time I get the opportunity to play with such a good group of guys, it’s something you can’t turn down. I’m really looking forward to this week.”

Wild weather in Perth has disrupted Australia’s preparations for the clash, with captain Pat Rafter a little concerned about the condition of the grass courts.

“The court is dead and flat unfortunately. Hopefully over the next couple of days we can get a bit of speed back and a bit of bounce,” Rafter said.

“We just need some good weather over the next few days.”

Uzbekistan will be spearheaded by world No.55 Denis Istomin and world No.133 Farrukh Dustov, with Temur Ismailov and Sanjar Fayziev completing the squad.