Rafter urges Hewitt to play on in 2015

Tennis legend Pat Rafter hopes Lleyton Hewitt will play on next year, but says it's crucial for Australia to get back into the Davis Cup World Group for this to happen. 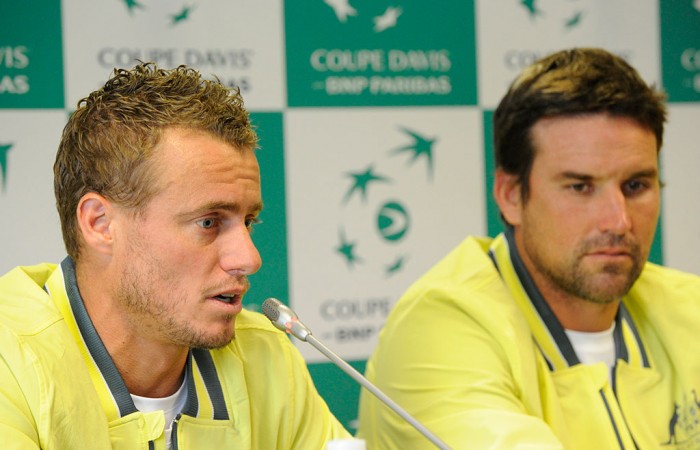 Tennis legend Pat Rafter hopes Lleyton Hewitt will play on next year, but says it’s crucial for Australia to get back into the Davis Cup World Group for this to happen.

A win would propel Australia back into the World Group for the second year in a row.

But should Australia lose the relegation tie, they will face a year of ignominy in the Asia/Oceania zonal group.

Hewitt is yet to commit to playing on next year, but if Australia are able to retain their spot in the World Group, he is expected to hold off on any retirement plans he may have.

“He wants to get back into the World Group. I think it will drive him to keep playing next year hopefully,” Rafter said in Perth on Wednesday.

“He sets such great examples for these young kids. These kids are very lucky to see the way he is and the way he behaves and acts in a Davis Cup environment.”

Thanasi Kokkinakis was listed as a hitting partner, but Rafter said he would consider handing the 18-year-old a shock berth against Uzbekistan.

Uzbekistan is set to be represented by world No.44 Denis Istomin and world No.134 Farrukh Dustov.

Rafter is confident Australia will produce the goods on their favoured grass surface at Cottesloe Tennis Club.

“We are definitely the team that should win,” Rafter said.

“We beat them on clay last year in their country, so you would have to think we will beat them here.

“We are without Bernard Tomic though, which does hurt us a little bit. But in saying that, we still have a strong team.”

Kyrgios enters the tie in hot form after reaching the quarterfinals of Wimbledon and the third round of the US Open.

In his first round match over world No.23 Mikhail Youzhny, Kyrgios’ emotions boiled over at times before he recovered to win in four.

“I think he learned from that. He’s going through a rollercoaster ride with being the next kid on the block and showing he can beat all these top guys,” Rafter said.

“I think he’s feeling a little bit of pressure, but as time goes on, he’ll get better and better at handling it.”