Bernard Tomic says Nick Kyrgios's spectacular arrival as a Grand Slam force was just the spur he and Australian tennis needed ahead of the US Open. 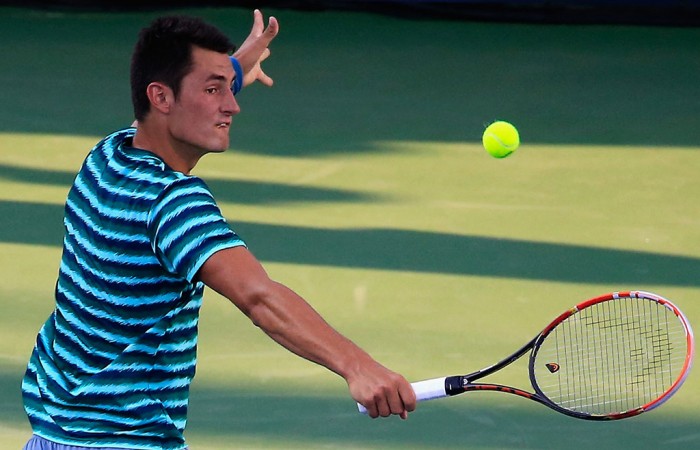 Tomic begins his US Open quest on Tuesday buoyed by Kyrgios’s unexpected march to the Wimbledon quarterfinals and says he welcomes their friendly rivalry and hopes it will lift both young guns to greater heights.

Tomic also blazed his way to the last eight at the All England Club as a teenager before tumbling from a career-high 27th in the world in 2012 to outside the top 100 after a second-round Wimbledon defeat in June.

But while his critics were quick to write off Tomic and hail 19-year-old Kyrgios as Australia’s new great hope, Tomic quietly went back to work to restore his standing in the game.

After winning the ATP title in Bogota and qualifying for both the Toronto and Cincinnati Masters events, Tomic is back up to world No.67.

“It was a spur for everyone,” Tomic told AAP before his first round US Open encounter with German Dustin Brown.

“Everyone sort of looked at Nick as the new kid and as bringing a lot to the game. He was playing very good and very relaxed and, when I look at it, it was also the same position that I was in.

“I was playing relaxed, going for my shots, and that’s when you play your best.”

Kyrgios’s stunning rise coincided with his own ranking fall to No.124 in the world, but Tomic said he didn’t use their shifting fortunes as any special motivator to close the gap.

Entering the US Open, the pair are separated by just seven places – Kyrgios is 60th – behind long-time Australian No.1 Lleyton Hewitt at 41st.

“Seeing Nick make the quarters, I was very, very happy to see that because we don’t know how long Lleyton will keep playing and we need someone else,” Tomic said.

“Nick’s sort of saved us. He’s come in and I’m very fortunate to have him and it’s going to be good building with him over the next five, 10 years.

“We both know we need to keep our heads down and work hard and I’m sure we’re going to do that.”

Two weeks after Kyrgios’s Wimbledon breakthrough was when Tomic won his second career title in Bogota.

To casual observers, it seemed Kyrgios’s success had sparked Tomic back into action.

Tomic, though, said it was more the culmination of his steady comeback from hip surgery after the Australian Open.

“Obviously it was a tough period starting back on the clay, not my best surface, after my surgeries,” he said.

“It was difficult. Then I went on to grass and found my feet a bit but I got a few tough draws. I thought I played okay on grass.

“But afterwards I knew I needed to work hard. I lost my ranking so I needed to do something good and I won my second title. That was huge.

“Confidence-wise leading into this US Open, I couldn’t be happier. I’ve won 10 matches the last five weeks.”

Tomic and Kyrgios – PS4 playmates in their downtime in New York – will also play doubles together at Flushing Meadows and hope to give Davis Cup captain Pat Rafter another option for next month’s World Group playoff against Uzbekistan in Perth.